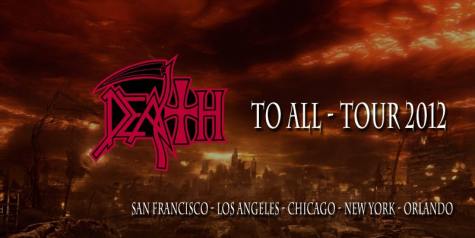 TESTAMENT, FORBIDDEN Members To Make Guest Appearances During 'Death To All Tour'

A number of acclaimed metal musicians will make special guest appearances during the "Death To All Tour 2012" in benefit of Sweet Relief. This five-city trek, which will feature a majority of DEATH's amazing musicians, will celebrate the life and music of Chuck Schuldiner, as well as to raise awareness of Sweet Relief Musicians Fund — a charity that provides financial assistance to career musicians faced with illness, disability or age-related problems.

According to the organizers, "There will be guest appearances in each city and some cities may have more than one surprise in store. You never know when or where these guests will be showing up, but you can expect to be seeing the following musicians somewhere on the tour."

The drums on the "Death To All Tour 2012" will be handled by Gene Hoglan ("Individual Thought Patterns", "Symbolic") and Sean Reinert ("Human"). On bass will be Steve DiGiorgio ("Human", "Individual Thought Patterns") and Scott Clendenin ("The Sound Of Perseverance"). Guitar duties will be shared by Paul Masvidal ("Human"),Shannon Hamm ("The Sound of Perseverance") and Bobby Koelble ("Symbolic"). The vocals will be taken care of by Steffen Kummerer of OBSCURA and Charles Elliott of ABYSMAL DAWN and BEREFT.

The dates are as follows (opening act listed in parenthesis):