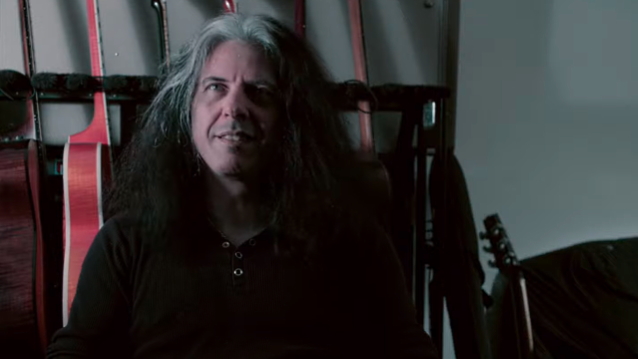 The first in a series of webisodes leading up to the release of "Titans Of Creation", the forthcoming thirteenth studio album from San Francisco Bay Area metallers TESTAMENT, is available below. The 11-minute clip focuses on lead guitarist Alex Skolnick.

"Titans Of Creation" will be released on April 3 via Nuclear Blast. The long-awaited follow-up to 2016 album "Brotherhood Of The Snake" was produced by singer Chuck Billy and guitarist Eric Peterson while Juan Urteaga of Trident Studios handled co-producing, recording and engineering. Andy Sneap was responsible for the mixing and mastering of the album. Eliran Kantor stepped up once again to create a new masterpiece of artwork for the cover of this release.

In a recent interview with Heavy New York, Billy was asked if the band's new disc is a musical continuation of "Brotherhood Of The Snake". He responded: "You're always trying to top your last record, and I thought 'Brotherhood', up to that point, was a pretty strong record. This one, it definitely stands on its own — all the songs have their own identity. Eric [Peterson, guitar] somehow came up with a way to make it be TESTAMENT but feel fresh and new still TESTAMENT, so that's pretty awesome."

He continued: "It was a quicker process than the last time, but I think at the end, the mix is awesome, the songs came out awesome, and the process wasn't as painful as it was the last time. So, it's a good record. I can't wait for everybody to hear it."

TESTAMENT's "The Bay Strikes Back 2020" European tour kicked off on February 6 at Amager Bio in Copenhagen, Denmark. The trek, which also features EXODUS and DEATH ANGEL, is hitting 25 cities before concluding on March 11 in Hannover, Germany.