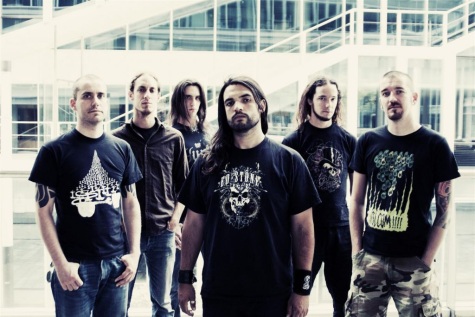 Kaaos TV conducted an interview with Dutch progressive technical metallers TEXTURES at this year's edition of the Tuska open-air metal festival, which was held June 29 - July 1 in Helsinki, Finland. You can now watch the chat below.

TEXTURES toured Europe in March and April with support on different dates from SYLOSIS, UNEVEN STRUCTURE and MY OWN PRIVATE ALASKA, culminating in several shows in their native Holland in April and May. They are currently hitting the European festival circuit, with additional appearances at Vagos Open Air (Portugal),Brutal Assault (Czech Republic) and more.

TEXTURES's new album, "Dualism", was released on September 23, 2011 in Europe, South America, Asia and Australia and September 27 in North America. The CD was recorded at Split Second Sound Studio in Amsterdam and was produced by TEXTURES guitar player Jochem Jacobs, who helmed all of the band's previous albums. The cover artwork was designed by former TEXTURES frontman Eric Kalsbeek and the band's bass player Remko Tielemans.