THANATOS Signs With DEITY DOWN RECORDS

Dutch death/thrash metal pioneers THANATOS will release their fifth full-length album, "Justified Genocide", in the first quarter of 2009 through Deity Down Records. The CD was recorded at Excess studios in Rotterdam, Netherlands and mixed by Dan Swanö (NIGHTINGALE, EDGE OF SANITY and BLOODBATH fame) at Unisound in Sweden.

In 2009 THANATOS will celebrate its 25th anniversary since the band first emerged from the Netherworlds.

The title track of the forthcoming CD as well as the song "They Feed On Fear" can be streamed on the band's MySpace page.

THANATOS in 2006 suspended the recording sessions for "Justified Genocide" at Excess studios in Rotterdam, Holland after the group's record label at the time, Greece's Black Lotus Records, announced that it was closing its doors.

THANATOS' fourth CD, "Undead. Unholy. Divine" (2004),was produced by Hans Pieters and the band at Excess and was mastered by Attie Bauw (JUDAS PRIEST, SCORPIONS, GOREFEST). 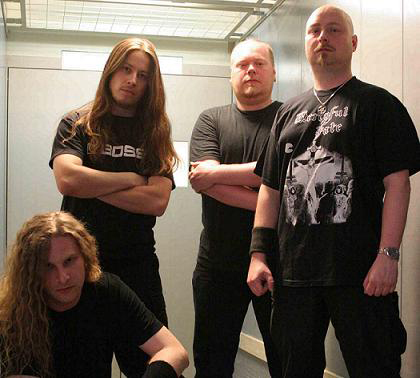