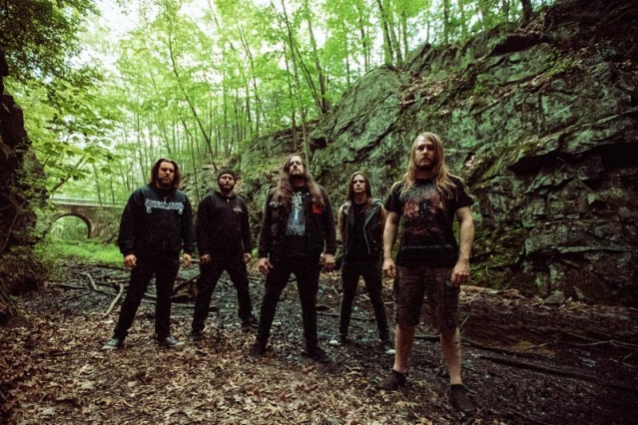 THE BLACK DAHLIA MURDER To Record New Album This Summer

Following THE BLACK DAHLIA MURDER's performance at the Sonic Temple Art + Music Festival in Columbus, Ohio earlier this month, guitarist Bran Eschbach spoke with Heavy New York. The full conversation can be viewed below. A few excerpts follow (as transcribed by BLABBERMOUTH.NET).

On the band's upcoming plans:

Brian: "We're writing new music now, and we're heading into the studio this summer. We're excited to present some more stuff soon. I don't think it will have too much to do with the last album, other than it's the same band playing it. It's not, like, a sequel or anything like that — just some more BLACK DAHLIA MURDER songs."

On guitarist Brandon Ellis (ex-ARSIS),who joined the band prior to the release of 2017's "Nightbringers":

Brian: "He brought songs to the table last time, and he's brought songs to the table for the next album too — great stuff. It's an honor to work with him. He's a very creative dude and definitely gets what the band's all about... he just gets it. Everything he writes, he knows what THE BLACK DAHLIA MURDER sound is. It's always cool to have a good writing partner that gets what the original mission statement of the band is."

On whether the band enjoys "experimentation" when writing new material:

Brian: "It's never really like a conscious efforts to try to do something different or stay the same. I know it's the same for Brandon as it is for me — we just play with our guitars and mess around until something sounds cool, and [there's] an idea that's worth fleshing out and seeing what will be the next part and the part after that. We're not really strategic about it – it just kind of happens. We don't start writing songs with a goal in mind... It's not thought-about like that."

On performing in front of different types of crowds:

Brian: "An audience can vary from day to day, even if you're on a month-long tour with the same three bands. We see all sorts of different people, which is refreshing and cool. There's periods of time that will come and go where you see the scene... people become more like they want to look a certain way or claim a certain identity. People dress like, 'I'm a death metal dude,' or, 'I'm a black metal dude,' and now's one of those times where you're seeing all sorts of different people that look all sorts of different ways, or they look like they're from different walks of life, and they're coming to metal shows. That's cool. Whatever keeps everything going. If people want to come and see heavy shit, they should."

On the differences between performing at a large festival like Sonic Temple and the club shows the band normally plays:

Brian: "There's a ton of variables to any day. A size of a venue isn't going to dictate how the show's going to go. A huge room can sound cavernous, [with] a PA that's shooting sound in all sorts of different directions and just sounds like soup, but it doesn't necessarily mean the show's going to be bad or good. Different rooms sound different ways."

THE BLACK DAHLIA MURDER's forthcoming ninth album will serve as the follow-up to "Nightbringers", which was released via Metal Blade.