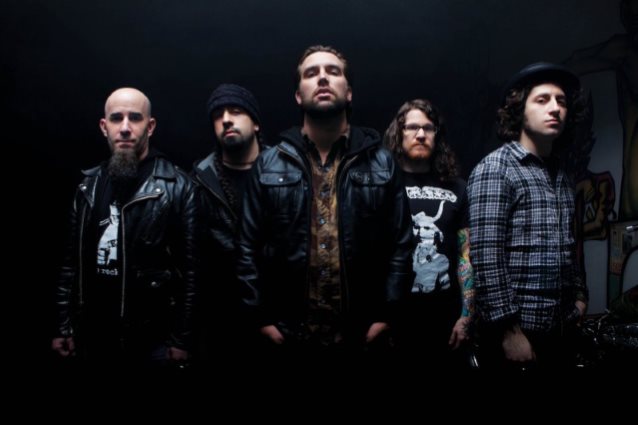 EVERY TIME I DIE's Keith Buckley has uploaded a short clip of what appears to be a new song from THE DAMNED THINGS, his supergroup project also featuring ANTHRAX's Scott Ian, FALL OUT BOY's Andy Hurley and Joe Trohman, EVERY TIME I DIE's Josh Newton, and Rob Caggiano of VOLBEAT (and formerly ANTHRAX). Check out the video below.

Hurley recently revealed THE DAMNED THINGS has a new EP in the works. He told the "100 Words Or Less" podcast: "I recorded five songs for an EP with THE DAMNED THINGS. I don't think we'll be playing, ANTHRAX is still touring on their last record. EVERY TIME I DIE just put out their new record, uh, who else? Josh Newton, I think, has been playing lately. He tech'd for Joe for awhile. I'm not sure if he'll be back when we're back. So, you know, that's all over the place."

THE DAMNED THINGS released its debut album, "Ironiclast", in December 2010. After performing a few gigs together, the members took a hiatus and returned to their respective bands.