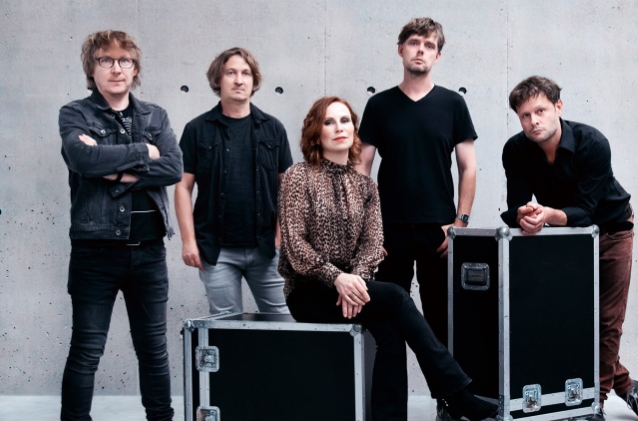 THE GATHERING Is Recording First Album In A Decade

Drummer Hans Rutten of Dutch/Norwegian rockers THE GATHERING has confirmed that he and his bandmates are working their first studio album in almost a decade. "We have recorded a lot, we can say," he told Portugal's Underground's Voice in a new interview (see video below). "We have quite a lot of material. And we decided to work with Attie Bauw — he's the producer of the new album. And he also worked on 'Home' [2006] and 'How To Measure A Planet?' [1998]. We know Attie quite well — he's a friend of ours. With this material, we really [thought] that it would be good to have a producer, to not do everything on our own, but this time to use the magic of Attie.

"We recorded almost everything," he continued. "We still have to record vocals and some things, so we're not finished yet. But what can I say about it? It's a big trip. It's a big adventure."

Regarding the musical direction of the new THE GATHERING material, Hans said: "It's difficult for me to get a hold on how it sounds, to put it in words, really. You can hear that Attie is working with us; that's for sure. And, yeah, I'm very enthusiastic about it, but every musician is always enthusiastic about his new album. I find it quite difficult to say something about it. I think people have to listen to it. So we hope to finish it soon, and then we can show the world, in fact, how it sounds."

Asked if the new THE GATHERING album will be released in 2021, Hans said: "The virus is going on — everybody knows — but we really want to release it this year. So we are aiming after the summer, but it depends on recordings. We want to record with Silje [Wergeland, THE GATHERING's Norwegian singer], of course. It's difficult to travel right now. It's the idea that she's coming to Holland to record vocals, but it's difficult because of the virus. So we're looking for maybe other possibilities. But the main thing is we really want to have a new album this year."

Rutten also talked about what it is like to be working on THE GATHERING's first album since 2013's "Afterwords". He said: "We don't see 'Afterwords' as the last studio album. We all see 'Disclosure' [2012] as our last studio album, and 'Afterwords' was more or less a 'Disclosure' after-party. Frank [Boeijen, keyboards] and René [Rutten, guitar] really wanted to do some extra things — to make remixes. We had some sounds going on and some ideas, so we devoped into a sort of — it's a mini album, maybe, but it's a long album. But that said, we don't see it as a full-length album of THE GATHERING, more as sort of an EP kind of thing."

According to Hans, the downtime during the coronavirus pandemic afforded him and his bandmates the perfect opportunity to focus on making a new album.

"It's strange, because touring is really impossible," he said. "Everything is unsure, especially this year, and I'm afraid it will take a while [before we can go back on the road]; it will become difficult to tour. On the other hand, what we can do is make new music, and you can do it at a distance, of course — send files, send ideas to each other. And that's the thing we can do, and that's what we did the last year, 2020. [We] bounced back e-mails with files, and that's what we did. So we tried really to focus on making new material — writing new material, talking about it. So that's what we did. The main focus was really writing. And, yeah, the virus, what can we do? What can we say about it? Did it influence the new music. I think so, but on other hand, it's difficult to say because we're still into it. It's difficult to say something about it. I think we have to wait after the whole thing. When it's totally over, maybe we can say what was the influence. But it's difficult to say about it right now."

Released in September 2013, "Afterwords" contained three songs that originally appeared on the "Afterlights" EP in 2012, two "Disclosure" remakes, three brand new THE GATHERING tracks and a cover version of a song called "Areas".

"Disclosure" arrived in September 2012 via THE GATHERING's own Psychonaut Records.

Posted by theGathering on Friday, January 15, 2021