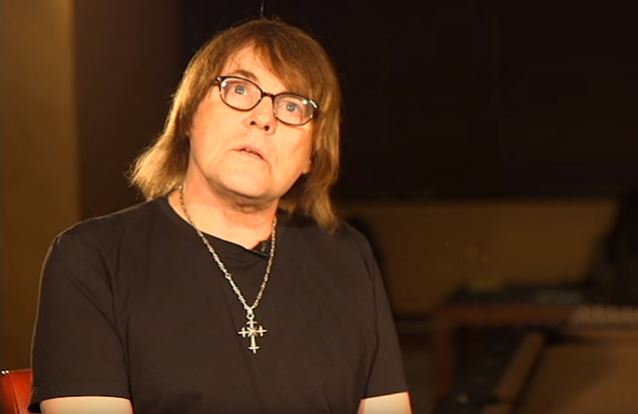 The Story Behind DOKKEN's Most Famous Ballad 'Alone Again'

DOKKEN frontman Don Dokken was recently interviewed by the KBAD 94.5 FM radio station in Sioux Falls, South Dakota. You can now watch the chat below. A couple of excerpts follow (transcribed by BLABBERMOUTH.NET).

On whether there is one particular DOKKEN song that holds a more special place in his heart than others:

Don: "Well, I mean, 'Alone Again', obviously, was our most famous ballad, and the funny thing was I wrote it when I was 25. And I wrote it on a little four-track recorder, put it on a cassette and it ended up in a box for, like, eight years. And the record company, on 'Tooth And Nail', our second album, they said ballads are the thing. JOURNEY had a big hit with 'Lights' and NIGHT RANGER… Everybody had ballads, and we didn't have any ballads. So I dug out a bunch of times, and [I went], 'What's this? 'Alone Again' I don't even remember it.' So I listened to it, and Jeff Pilson, the [DOKKEN] bassist, listened to it, and he said, 'That's a cool chorus. Maybe we [can] revamp it.' So we recorded 'Alone Again'. This is a thing I wrote when I was very young, very naïve. Everybody says, 'Who'd you write about?' 'I don't know.' 'What was the girl's name?' 'I don't know.' I must have been in love — it's a very sad song — but I don't remember who I wrote it about. I don't know. It was just a song that came out, I always say, from here [points up above his head] — whatever that higher power is."

On what he would attribute DOKKEN's success to:

Don: "Luck. Well, I don't know… I mean, great guitar player, great drummer… We were all lucky that… A lot of the bands had a band and there was a singer. But in DOKKEN, everybody was a singer — a good singer — so we capitalized on that and had harmonies. When we did the first album, I remember the record company saying, 'You're heavy, but you're melodic. You need to pick which way you're gonna go. You're gonna be heavy metal or you're gonna be melodic pop.' And I said, 'Why can't I do both?' And they said, 'Well, it won't work. You're gonna alienate the metal fans, you're gonna alienate the pop fans.' But I stuck to my guns. I said, 'We're gonna do straight-ahead songs like 'Breaking The Chains' and we're gonna do songs like 'Tooth And Nail'. And if the album doesn't sell, oh, well. And it worked out. I find that there's a lot of luck involved. I don't think it's just talent."

Over the course of the last few months, Don has apparently become more receptive to the idea of a reunion of DOKKEN's classic lineup, featuring him, Pilson, guitarist George Lynch and drummer Mick Brown. Pilson recently told rock journalist Mitch Lafon: "We're actually working really hard to try and pull something together right now. It has to fall in spaces where there is time off [from my gig with FOREIGNER], so I don't know for sure whether it's gonna happen. So let's just say we're all friendly now, we're all past all the decades-old crap, and we all talk and everything's great. Now it really is just down to scheduling and trying to figure it out. Because, you know, you've gotta do it right, if you're gonna do it. We all feel that way."