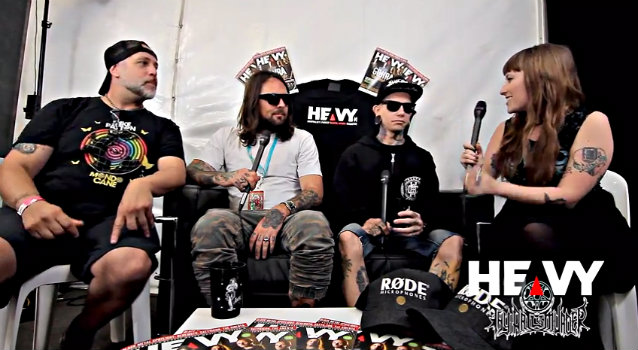 Heavy Television's Cassie Walker conducted an interview with Australia's hottest new extreme metal export THY ART IS MURDER during this year's Soundwave festival in Australia. You can now watch the chat below.

THY ART IS MURDER's second album, "Hate", was released in the U.S. on April 2, 2013 and in Europe on April 5, 2013 via Nuclear Blast Entertainment, the new U.S. partnership between Nuclear Blast owner Markus Staiger and former Roadrunner Records A&R chief Monte Conner. The CD was produced and mixed by Will Putney (SUICIDE SILENCE, BORN OF OSIRIS, FOR TODAY),with artwork created by Brent Elliot White (CARNIFEX, DEATH ANGEL).

"Hate" came in at No. 35 on Australia's Top 40 ARIA chart, making it the highest debut of any Aussie death metal band ever.

THY ART IS MURDER last fall completed a North American headlining tour. Joining them on the trek, dubbed "Hate Across America", were I DECLARE WAR, FIT FOR AN AUTOPSY, THE LAST TEN SECONDS OF LIFE and KUBLAI KHAN.

Rising from the unhallowed wastes of Western Sydney, THY ART IS MURDER has carved a trail of bloody mayhem since their inception in 2006. With an acclaimed EP and debut album in "Infinite Death" and "The Adversary" to their name, the band have traversed the highways and autobahns of Australia and Europe on a relentless crusade to destroy every venue and audience they can with like-minded peers in a who's who of heavy metal.

Simply titled "Hate", the band's second full-length is the pointed result of THY ART IS MURDER's growing dissatisfaction with all aspects of modern life — political, religious, social and environmental — everyone is to blame.

Fusing the blasting technicality of metal luminaries THE BLACK DAHLIA MURDER with thunderous breakdowns and the intensity born of their nascent hometown scene; the blackened grandeur of BEHEMOTH and the pit-churning groove of Tampa originators MORBID ANGEL and CANNIBAL CORPSE, the furious musical arrangements provide a bloody canvas for vocalist CJ McMahon's outpourings of bile.