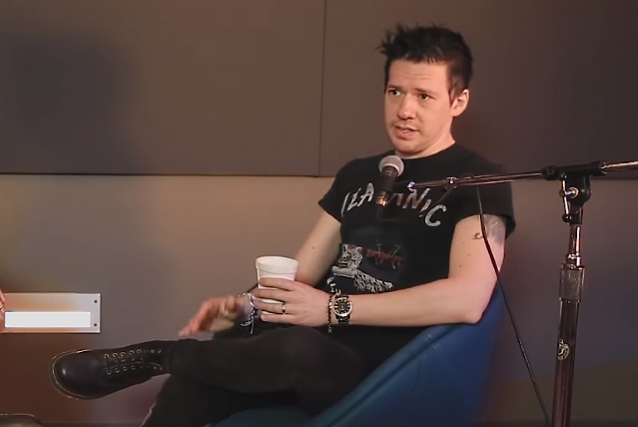 TOBIAS FORGE Says He May Not Always Front GHOST: 'I Could Definitely Picture Myself Getting Someone Else To Sing And I Just Play Guitar'

Walt from Chicago radio station 101 WKQX recently conducted an interview with GHOST frontman Tobias Forge. You can watch the entire chat below. A few excerpts follow (transcribed by BLABBERMOUTH.NET).

On how the main riff from the song "Stand By Him" inspired him to launch GHOST:

Tobias: "As you do when you're a guitar player, I guess, you just fiddle around, you just play a little bit of others' riffs and then you sort of do a little bit of yours. You tinker. [In] 2006, at the time, I had my own band — it was called SUBVISION — where I was the sole music writer and the singer and guitar player, which, I don't know how to describe it. My intention with that band was to be some sort of mixture between… I liked a lot of old New York bands at the time, like BLONDIE and TELEVISION and stuff like that. So I wanted it to be a mixture. Imagine if DEAD BOYS was a little bit more musical — no offense against the DEAD BOYS; I love DEAD BOYS. But I wanted them to be a little more fine-tuned, a little bit more like TELEVISION, but sort of looking like GUNS N' ROSES did in 1987. So I wanted it to be some sort of power-punk-pop band on steroids. And I think we ended up being nothing of it, because it was just all over the place. It was very unfocused. A lot of people say that a lot of the things I'm doing with GHOST now is very reminiscent of what we used to do in SUBVISION, and that's probably correct. Had time been on our side with SUBVISION, there's a likelihood that that would have continued and, musically, probably could have become what GHOST is, in a sense. But since SUBVISION was sort of farting out and I was spending some time also in 2006 playing bass… Friends of mine, they had a band, and I was just playing bass in that, just for fun. That was more recreational in a way, because despite [the fact that] most of the time throughout my life had been spent being the sort of dictator in my own band, I actually do enjoy just playing others' [music] as well, to whatever extent I have done it — very little."

On the lack of pressure that comes with simply handling an instrument in a band:

Tobias: "The time that I have spent sort of in the background, I also, in 2006 and onwards, when GHOST began to appear in my head, my intention was to just play guitar. I wanted to write everything and I wanted do back-up vocals. I just wanted to be the guitar player. That's always been in my head — I am a guitar player."

On whether he wants to play guitar onstage with GHOST:

Tobias: "In a way. It's not weird, because now, obviously, I'm conditioned into being the singer guy, but if I had my way and definitely in an alternative future, if whatever happens, I could definitely picture myself sort of getting someone else to sing and [I] just play guitar. I love playing those songs myself. Obviously, I don't do it very often, and if I'm just given a guitar, I have to refresh my memory and, of course, the more time I spend jumping around doing other things, the less I play guitar, which is a little bit of a cycle where every time I come home, I play a little bit more, and then I go on the road and I play a little bit less. And then as soon as I go in the studio again, I have to really, really, really get my chops up again."

On how his lyrical approach has changed over the course of four studio albums:

Tobias: "In the beginning, when I had no idea that this was gonna be music digested by a lot of people, it was definitely a little bit more oriented around what I thought was cool. It was more paying homage to a certain style of lyrics that I grew up listening to, be it death metal, black metal or ANGEL WITCH or stuff like that. I wanted to have a certain aura, whereas… You can write so many lyrics about black candles burning. After a while, it gets very, very repetitive and I'm sure there's a lot of 'cult rock' bands that are just regurgitating that stuff. And I am a lifelong, and I will forever, as long as I live, be a devotee and a fan of that sort of lingo. But making records after 'Opus Eponymous', I definitely felt that, well, there's a way to wrap that in, but you need to say something. There needs to be some sort of substance. On the first record, I wasn't really paying attention to that. I wanted to make a real cool record that I wanted to listen to. On the second ['Infestissumam'], I was, like 'Well, if you have all these people listening, you might as well say something.' I have a lot of things on my mind, so why not?"

On whether he feels a sense of responsibility with his lyrics:

Tobias: "Yes. Oh, yeah. Still, I need to also keep in mind that this is, first and foremost, an entertainment act. We're not political in that sense, even though I think a lot of things I'm saying is obviously resting on some political opinion [or] base. But, that's not the point. However, I know that there a lot of people in our fanbase that are listening. And there are a lot of things we have in common, and there a lot of things I believe that could be communicated in one way or another to sympathize or empathize as well and also to comfort. I definitely think you have a little bit of responsibility to communicate somewhat with your fans, but I think most artists do that naturally."

Forge recently confirmed to Revolver that he will return to the studio in January 2020 to begin work on the band's follow-up to 2018's "Prequelle" album.

"Prequelle" debuted last June at No. 3 on the Billboard 200 chart. It has yielded the chart-topping "Rats" and "Dance Macabre", as well as the latest single "Faith".

GHOST will embark on a North American tour this fall in support of the disc, starting on September 13 in Bakersfield, California and wrapping on October 26 in Glens Falls, New York.