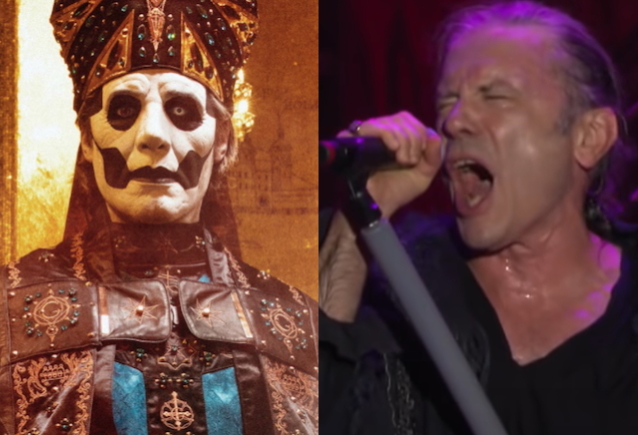 GHOST mastermind Tobias Forge was interviewed on the May 8 edition of the "My Planet Rocks" show on the U.K. rock radio station Planet Rock where he cherry-picked a collection of rock songs that have inspired him. Alongside tracks by RAMMSTEIN, FOO FIGHTERS, KILLING JOKE and METALLICA, Forge picked IRON MAIDEN's 2000 anthem "Blood Brothers" as one of his song choices. Asked if MAIDEN has been a "massive influence" on GHOST, Forge said: "Absolutely. Both musically and also stage production-wise. But also when it comes to work ethics and just the sheer volume of work you have to put into your job [and] in your craft has always been inspiring to me.

"When I was a kid, I was sitting with [IRON MAIDEN's 1985 live album] 'Live After Death' record and I was dead set on wanting to become a professional musician and I wanted to tour. I knew about the concept of touring, but a lot of my knowledge or my preconceived notions of what I thought touring was about was looking through 'Live After Death' and seeing all those dates that they were playing everywhere. I sat there with like a big map book and just drew out how they toured, where they played and how often you play. That record in the inner sleeve, you have a lot of information about touring life."

"In 1995 when they made the first record with Blaze ['The X Factor'], I was so buried in death/black metal stuff, and I was so busy exploring what happened in 1985 that I didn't have time for following that. So, of course, I was amazed when Bruce came back into the band and they made this triumphant return. I must say that 'Brave New World', the comeback record with Bruce, was and still is an unbelievably well-constructed record… That record is actually really good from start to finish. Unbelievable.

"It's incredible that a band 20 years into their professional career were able to still add songs to their already existing and mind-blowingly great repertoire. I think that 'Blood Brothers' is a song that they are still playing at most of their shows, but they could easily play 10 songs from that record."

Back in 2017, Forge spoke to Free Press Houston about the experience of touring the United States with IRON MAIDEN. Asked how the first few shows had gone for GHOST, Forge said: "Amazingly well. I mean, coming on to a tour as support is very hard to predict; you can't expect a lot of things. You can expect things from a practical point of view, like whatever you agree upon. But from a crowd point of view, you have to go in with a very, very open mind, especially with established and iconic bands like IRON MAIDEN. People are there to watch them, you know? You just have to make the best out of it.

"I must say that, a couple of shows down, they have been overwhelmingly accepting," he continued. "Enormous responses from the crowd. If we don't have them by the first 5 to 15 minutes, we definitely have them within the last 10, so I see that as a good sign. But you know, it differs when you go to different areas. A lot of the cities that we're playing we've played several times on our own over the years. We've gone from venues that hold 500 up to 3,000 on our own, so I guess we're not entirely unknown. But there is a difference between a few thousand people and 20,000."

GHOST is continuing to tour in support of its latest album, "Impera", which sold 70,000 equivalent album units in the U.S. in its first week of release to land at position No. 2 on the Billboard 200 chart. It marked the third top 10 album — and fifth top 40-charting set — for the Swedish act.