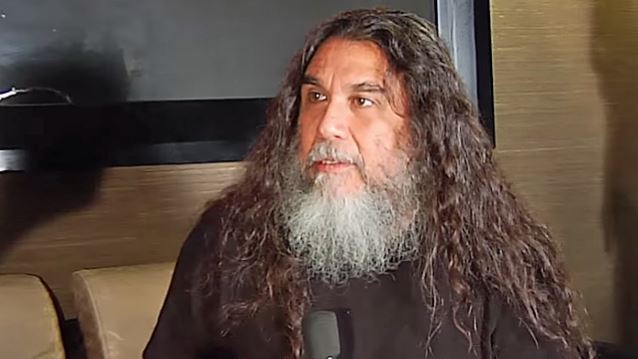 TOM ARAYA: 'Repentless' Album Is 'Really Good For Half Of SLAYER'

Germany's Rock Hard magazine recently conducted an interview with SLAYER bassist/vocalist Tom Araya. You can now watch the chat in six parts below.

Asked what he thought when he first heard the final version of SLAYER's eleventh studio album "Repentless" — the band's first without both founding guitarist Jeff Hanneman and drummer Dave Lombardo — Araya responded: "When I heard it… After I heard the whole thing, 'My God, this is SLAYER.' It's SLAYER. When someone [asks], 'How do you feel about the record?' I say, 'It's SLAYER. Well, half of SLAYER, but it still sounds like SLAYER.' It sounds like a SLAYER record. When you listen to it, you go, 'This is SLAYER.' But then you have to sit back and [go], 'Well, part of SLAYER… It's half of SLAYER.' You know what I mean? Because of what we've gone through. I listen to it and… Inside, yeah, I feel like, 'Okay, well this is…' Because of my perspective, it's half of SLAYER. But when I listen to it, it's SLAYER; it's identifiable."

"Repentless" was released on September 11 via Nuclear Blast. The follow-up to 2009's critically acclaimed, Grammy-nominated "World Painted Blood" was produced by Terry Date, who has previously worked with PANTERA, DEFTONES and SOUNDGARDEN.