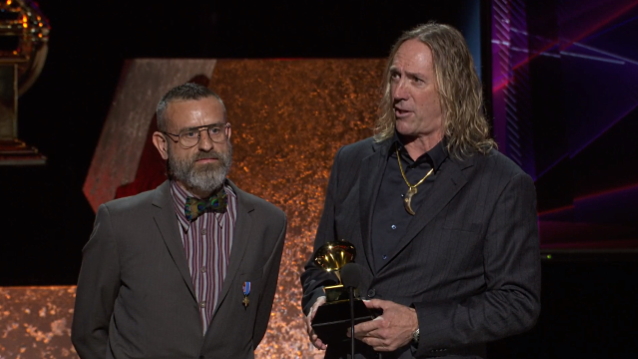 TOOL was honored with a Grammy in the "Best Metal Performance" category in the pre-telecast ceremony at the 62nd annual Grammy Awards, which is being held tonight (Sunday, January 26) at Staples Center in Los Angeles. TOOL was nominated for "7empest", a track from its 2019 album "Fear Inoculum".

In his acceptance speech, Danny said (see video below): "Wow! It kind of renews my faith in humankind that there's long attention spans left out there that can listen to a 12-minute song.

"I'd like to thank all the Gods, 'cause I don't think it's a good time to piss any of them off," he continued. "My bandmates Justin, Adam and Maynard, who I couldn't do anything without. And my mom for educating me and over a thousand other people. My lovely mother of my children — about-to-be children; just a child right now. This is for you also, baby.

"As artists, we're all influenced by the people that come before us, and for me, it's all about the great drum gods," Danny added. "I do my best to channel them every time I'm working — namely John Bonham, Tony Williams and, recently, my good friend Neil Peart. This is for all of you guys."

The majority of the awards in the 84 Grammy categories spread across 30 fields are being handed out in a non-televised event, the Premiere Ceremony, this afternoon. The televised portion of the Grammys will begin on CBS at 5:00 p.m. PT/8:00 p.m. ET.

Alicia Keys will host music's biggest night for the second year in a row.

The award itself is a gilded gramophone, an early version of a record player/speaker combo.

The Grammys are voted on by approximately 13,000 Recording Academy members, who are comprised of artists, songwriters, producers and engineers. More than 21,000 recordings were submitted for Grammys consideration last year. For 2020 awards, music must have been released between October 1, 2018 and August 31, 2019 in order to be eligible.

Earlier this week, the Recording Academy faced allegations of sexual misconduct and voting irregularities after the abrupt departure of its president.