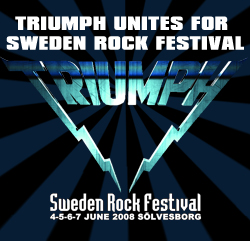 The fans demanded it, and the fans finally got it. After 20 years apart, the long-awaited TRIUMPH reunion of vocalist/guitarist Rik Emmett, bassist/keyboardist Mike Levine, and vocalist/drummer Gil Moore took place at Sweden Rock Festival, on June 7, 2008. And now, the band is putting the finishing touches on the DVD of that historic performance.

The tentatively titled "Live At Sweden Rock Festival" set will consist of a DVD and CD, with a release date targeted for later this spring.

"It's great to finally be able show the world TRIUMPH's reunion show at the Sweden Rock Festival," says Mike Levine. "It certainly is one of the most memorable performances of our entire career! And they said it would never happen…"

The band's setlist for the Sweden Rock Festival performance was as follows:

As one of the godfathers of prog metal and leading lights of arena rock, TRIUMPH formed in 1975, and built a large and loyal fanbase by the late '70s on the strength of their non-stop touring schedule throughout Canada and the USA and the success of their classic albums, "Rock & Roll Machine" and "Just A Game".

But it was in the 1980s when TRIUMPH truly became a force to be reckoned with, as a string of gold/platinum-certified albums ("Progressions of Power", "Allied Forces", "Never Surrender" and "Thunder Seven") and classic hits ("Fight the Good Fight", "Magic Power", "Lay It On The Line") solidified the group as one of rock's top concert attractions.

TRIUMPH pushed the limits of arena rock to the max with is legendary live shows and virtuoso playing. Add to it some of the most recognizable and celebrated radio classics, a vault full of gold and platinum sales awards for their ten studio albums and there you have one of the most successful rock acts of the 1970s/1980s.