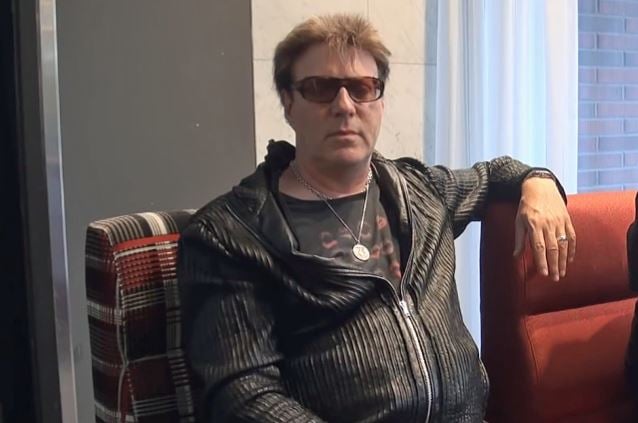 Kaaos TV conducted an interview with TWISTED SISTER guitarist Jay Jay French prior to the band's August 4 performance in Finland. You can now watch the chat below.

Asked if he thinks any of the newer hard rock artists have a shot at becoming arena-sized acts once the current crop of dinosaur bands are no longer around, Jay Jay said: "When I was 17 years old, when Jay Jay French was 17, THE BEATLES, THE [ROLLING] STONES, THE WHO, [LED ZEPPELIN], [PINK] FLOYD, Jimi Hendrix, Bob Dylan, Janis Joplin, THE GRATEFUL DEAD, JEFFERSON AIRPLANE, THE DOORS… none of them were older than 26 when I was 17. Now we, as 17-year-olds, never went to see bands that were 60; we saw bands that were all 25: THE BEATLES, THE STONES, THE WHO, ZEP, FLOYD, CREAM, Hendrix… They were all 25, 26 years old. If I told my mother I was gonna go see a band with 60-year-old guys, she'd look at me like I was crazy or I was going to some jazz band or some classical group. So now we play festivals where all the bands are 60 years old: us, WHITESNAKE, KISS, [BLACK] SABBATH, AC/DC… they're all 60. Maybe 50, with METALLICA.

French went on to say that the sales figures support his belief that the market for new rock music has weakened.

"Again, it's not Jay Jay saying rock is dead," he explained. "Look at the charts. Tell me where it is. It's not there. Radio doesn't play it, and it doesn't seem the kids are buying it. So if radio is not playing it, and the kids are not buying it, who's creating it?"

He continued: "Look, I am grateful; TWISTED SISTER is grateful that we have an audience, that we matter, that people love the band and they wanna see the band. IRON MAIDEN is grateful, and AC/DC is grateful, and JUDAS PRIEST is grateful. But we're all getting older. In five years, there'll be no more KISS and MAIDEN, and they'll all be retired. So who comes up? I don't know."

French added: "In South America, we have fans that are 17 to 22 years old; they fill soccer stadiums. And I say to them: who's your new band? 'Oh, we don't like our new bands.' Well, then… I don't know what to say then. Like, really? There's gotta be hundreds of them. You can't find one? Two? They'll put a couple on the shows with us, because they have to fill the gap a little bit. We just played Mexico, and there's a couple of bands there on the bill that are young and up-and-coming, but the enthusiasm isn't there for it. So I don't know. It's a strange time."

TWISTED SISTER last year announced its plans to call it quits after a final round of dates, dubbed "Forty And Fuck It - The Final Tour".

Drummer AJ Pero passed away in March 2015 at the age of 55. The rest of TWISTED SISTER has since recruited recruited Mike Portnoy (DREAM THEATER) to sit behind the kit for its farewell tour.