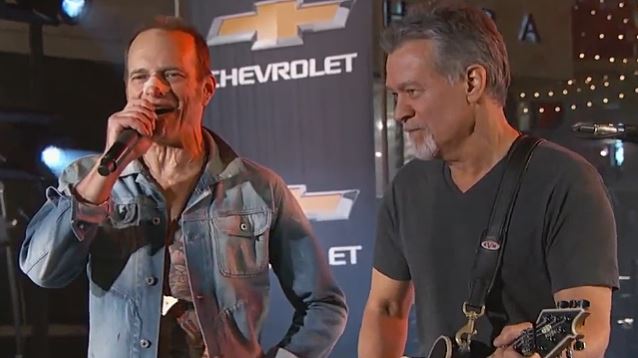 In celebration of its 2015 summer/fall North American tour, VAN HALEN performed a special concert for ABC-TV's "Jimmy Kimmel Live!" last night (Monday, March 30) on Hollywood Boulevard in Hollywood, California. Featuring some of the band's essential rock and roll classics, the show is being broadcast over two nights, March 30 and March 31, on the late night talk show and marks VAN HALEN's first U.S. television performance with original lead singer David Lee Roth since he rejoined the band in 2007.

A portion of Hollywood Boulevard between Highland and Orange was closed yesterday gearing up for the special event.

Roth cut himself on the nose with the microphone early in the performance, forcing VAN HALEN to stop the show for a few minutes so that he could step to the side and get it taped up. "I fucked my nose up with the microphone here," Roth told the crowd. "So we're gonna start the whole thing over, and give you a little extra for your patience."

Video footage of VAN HALEN performing the songs "Panama" and "Runnin' With The Devil" during Monday's concert can be seen below.

VAN HALEN has announced the dates and cities for a summer/fall North American tour that will kick off on July 5 in Seattle, winding down on October 2 in Los Angeles.

According to The Pulse Of Radio, VAN HALEN is also scheduled to appear on the April 2 edition of "The Ellen DeGeneres Show".

This will be VAN HALEN's first full-length tour after the band abruptly canceled a 2012 summer run in support of that year's studio album, "A Different Kind Of Truth".

Tickets for the trek go on sale beginning April 4 at Ticketmaster.com and LiveNation.com, with special pre-sale information being announced locally. The opening act will be KENNY WAYNE SHEPHERD.

March 31 will also see the release of "Live: Tokyo Dome: In Concert", the band's first official live album with Roth.

Recorded on June 21, 2013 at the Tokyo Dome in Japan, the set features 23 tracks taken from all seven albums the band recorded with Roth on the mic.

A deluxe edition of the album will come with the newly remastered "Van Halen" and "1984" albums, as both a four-CD collection and a six-LP vinyl set in special packaging.