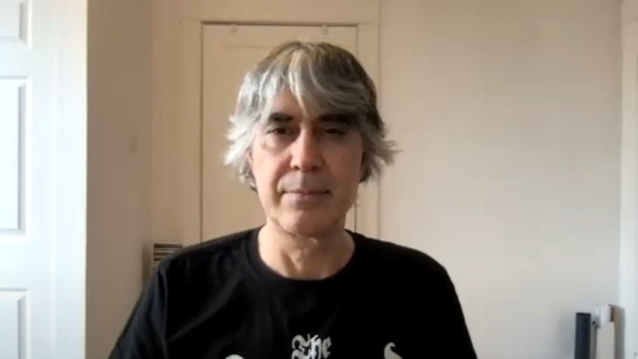 VOIVOD's AWAY On Rise Of Grunge In Early 1990s: 'We Could Feel The Wind Changing'

Drummer Michel Langevin (a.k.a. Away) of Canadian progressive sci-fi metal innovators VOIVOD spoke to the "When Words Fail…Music Speaks" podcast about how the rise of grunge in the early 1990s forced most hard rock bands off the radio and MTV, with album and tour sales plummeting.

"When we toured with FAITH NO MORE and SOUNDGARDEN in 1990 across North America, we could already feel the wind changing with the new alternative rock becoming more and more popular," he said (as transcribed by BLABBERMOUTH.NET). "Even the [movement] of the crowd was different; it was not a mosh pit — it was like a big wave. So we felt like something was coming which really sort of, I guess, influenced us into writing 'Angel Rat' — more of an alternative metal album. But when NIRVANA released 'Nevermind', I think the heavy metal bands probably felt like [what] all the bands from the '60s felt like when THE BEATLES showed up. We were, like, 'Okay, this is really something fresh.' A new decade, a new generation. And this took everything by storm. But we really embraced it. I really love the band [NIRVANA] and the music and all that."

He added: "So, yeah, I think the grunge movement is definitely something that hadn't happened in a long time… [NIRVANA] released 'Nevermind' in '91, and it was a new era."

Five years ago, Langevin was asked in an interview with RockSverige for his memories of Chris Cornell, having spent time on the road with the singer more than three decades ago as part of the aforementioned tour with SOUNDGARDEN and FAITH NO MORE.

"I was speechless and may people phoned me and wanted me to express my point of view on Chris's passing and I couldn't," Away said. "I said, 'There's nothing I can say right now.' First of all, he was very reserved and chilled and very quiet. On stage, he was the best frontman I've ever seen and he was actually the originator of, like, breaking everything and climbing everywhere, before Eddie Vedder started climbing and Kurt Cobain started banging stuff. Chris was doing that, so he was a pioneer for sure. Not to mention his incredible voice and presence, but he was also a very good friend. We traded art and he did a painting for me during the 1990 tour and right now I have a hard time looking at it. It's pretty intense. I met him a couple of times over the years in Montreal when he came there solo or with SOUNDGARDEN, and we did not necessarily keep in touch, but I went to see him and he was always super nice."

VOIVOD will release a new EP, "Ultraman", on November 4 via Century Media Records. The effort features a highly original tribute to the "Ultraman" TV series theme as well as previously unreleased bonus live cuts, available both as a 12-inch vinyl EP or as a digital EP.