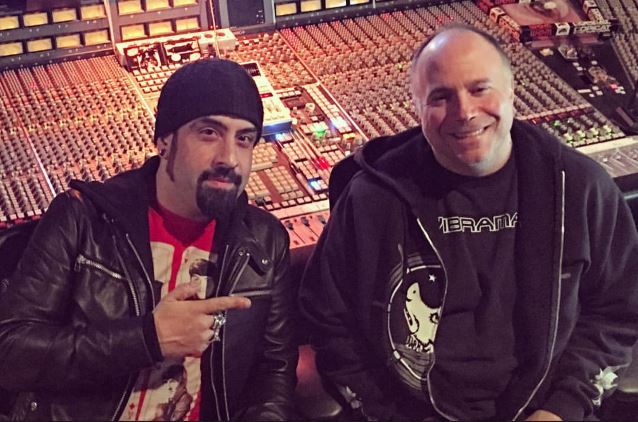 Danish/American rock 'n' rollers VOLBEAT have finished mixing their sixth full-length album with Joe Barresi, the American record engineer and producer who has previously worked with bands such as KYUSS, MELVINS, TOOL, CHEVELLE and QUEENS OF THE STONE AGE. The follow-up to 2013's "Outlaw Gentlemen & Shady Ladies" was once again co-produced by Rob Caggiano, who joined VOLBEAT as the band's lead guitarist in February 2013.

A photo of Caggiano and Barresi in the studio at the conclusion of the VOLBEAT sessions can be seen above.

VOLBEAT last November parted ways with bassist Anders Kjølholm. A replacement bassist has not yet been announced.

VOLBEAT performed a brand new song, "The Devil's Bleeding Crown", in full live for the first time in August 2015 in front of over 37,000 people at Tusindarsskoven in Odense, Denmark.

VOLBEAT will return to the road this spring with a string of dates around their first-ever Coachella performances April 15 and April 22 with support from BLACK STONE CHERRY and MONSTER TRUCK.

Celebrating its return to the U.S., the band will play with an intimate "Evening With Volbeat" show at the Roxy in West Hollywood, California on April 13. The legendary venue will serve as the perfect setting to get up close and personal with the band's signature hybrid of rock prowess, metal power, blues soul, and rockabilly swing.