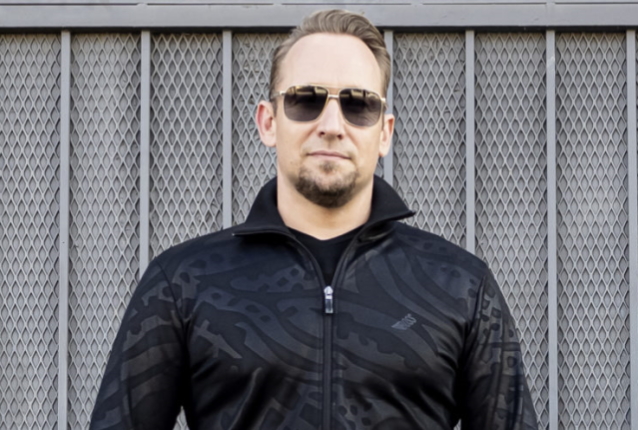 VOLBEAT's MICHAEL POULSEN: Making 'Servant Of The Mind' Album Felt Like A Rebirth

In a new interview with Ireland's Overdrive, Michael Poulsen of Danish/American rock and rollers VOLBEAT spoke about how the band's eighth album, last year's "Servant Of The Mind", fits into VOLBEAT's discography. He said: "For me, this album feels like the way we used to do things back in the day. It felt like a rebirth of what we did in the beginning and then taking the experience of being better songwriters with more heavy stuff. It still feels very new because we're only just getting to promote the album and play these songs live."

He continued: "What I've also noticed is that the album seems to have settled a lot of divided opinions with our fans, and for once they all seem to agree with each other. [Laughs] After so many albums, there are people that have their favorites, and in this case, they all seem to have stopped arguing with each other [laughs], and collectively like this latest release. It's nice to see them all getting along — for once."

Poulsen also talked about the challenges of recording "Servant Of The Mind" considering that three members of VOLBEAT are based in Denmark while guitarist Rob Caggiano lives in New York.

"For the records that we've done with Rob, we always book two studios," Michael explained. "He has a certain way of working that takes a lot of time. That's just his way. For us, we like to work really fast and spontaneously, and that's just the way we all connect with the music. We respect the way Rob works, but for me, I don't like to spend so much time focusing on certain things, as I feel it will lose its magic. [Rob] puts in a lot of hours, and likes to go deep into the structure of the song, working his parts into the arrangements. That's just his way of working, so that's why we always book two studios.

"When it came to 'Servant', it made no sense to me to just sit around, and wait for the pandemic to blow over. I would take my kids to kindergarten, and just go home, and write as much as I could, all day long. I did that for three months, consistently. Jon [Larsen, drums], Kaspar [Boye Larsen, bass] and I then booked a studio where we hammered out the album in about a week. Rob then booked a studio in New York, and he used a lot of time to put his parts together. That being said, I think it's some of the best work he's done to date. His solos are fantastic, and they work so well with the music.

"At the end of the day, the whole experience was really fun for me. We worked very hard, and then sent over the files to Rob, where he laid down his parts, and the whole process just felt very natural, considering that Rob couldn't come to Denmark even if he wanted to."

"Servant Of The Mind", was released in December 2021 via Republic Records.

Revolver called "Servant Of The Mind" "excellent… the darkest and heaviest VOLBEAT offering yet." For the LP, the band took its signature heavy metal, psychobilly and punk 'n' roll sound up a notch while showcasing Poulsen's keen ability for songwriting and storytelling. "Rarely has such a successful band sounded so ravenous," said Kerrang! magazine of the album.

"Servant Of The Mind" includes the "double barrel" of summer songs the band released in June 2021: "Wait A Minute My Girl" and "Dagen Før" (featuring Stine Bramsen),the former of which became the band's ninth number one single on the Billboard Mainstream Rock chart.