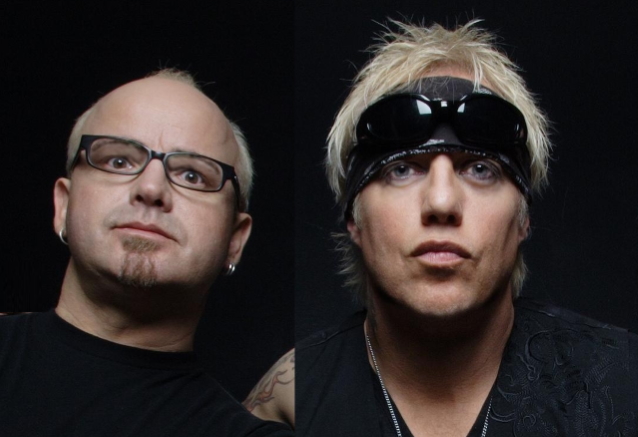 WARRANT's JOEY ALLEN On JANI LANE: 'I Miss The Guy Like A Brother'

Joey Allen says that he and his WARRANT bandmates tried to do as much as they could for Jani Lane before the singer's final exit from the group.

Speaking to "That Jamieson Show" about how Jani's last split from WARRANT came about, Allen said (as transcribed by BLABBERMOUTH.NET): "We tried the reunion for about a year, which started off great and just crashed and burned. And it was unfortunate. We all tried to do as much as you can for a guy that's having a hard time with substance, and at some point, there's not a lot you can do, and you've gotta hope that they have the strength in them to pull it off. But it was a wicked ride for him. And it's just tragic. It's not any better today than it was when it happened."

He continued: "I miss the guy like a brother. We spent a lot of years together, on and off the road, making some beautiful music, as well as having some fun with family and friends. So it's unfortunate, for sure. But at least we've got the music to remember him by and we go out, when we can — not in the last year [due to the pandemic] — and play those tunes in remembrance of him and what he meant for us."

Mason recently told Waste Some Time With Jason Green about how he found out about Jani's death: "I think it was us and the SLAUGHTER guys, we were all having dinner at a steak joint somewhere in the middle of the country doing a gig, and everybody's phone just buzzed — it seemed [like it happened] all at once. It was kind of rare for us — all band and crew; everybody — after flying in, we were all sitting around the table, with appetizers, waiting for entrees to show up, and all of sudden, everybody's phones just blew up. And it was that horrible look. I remember somebody looking and going [opens his eyes wide]. And I know they thought to themselves, 'This is what this is,' and they were dead right. We all picked up the phone, and we were, like, 'Did you just hear…?' 'Yeah, I just got a text from so-and-so.' 'I just missed a phone call from six people.'"