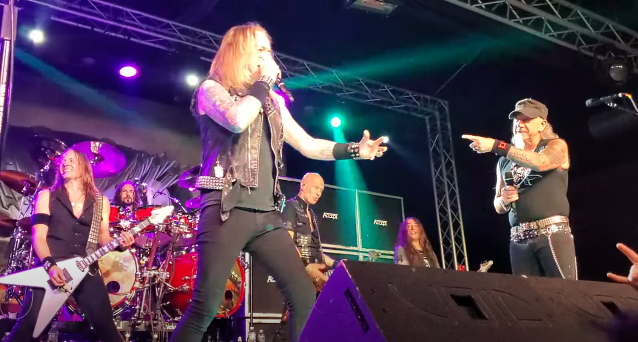 The October 21 show at Stereo Garden in Patchogue, New York and the October 22 gig at Paramount Hudson Valley Theater in Peekskill, New York marked Tornillo's return to the stage after he was forced to miss performances in Toronto, Ontario, Canada and Jim Thorpe, Pennsylvania because he was recovering from a "virus infection". A concert in Vineland, New Jersey was canceled due to Mark's illness.

It was announced prior to the Toronto concert that the 68-year-old Tornillo, who joined ACCEPT in 2009, would be unable to play the gig because he was having vocal issues and could have risked losing his voice had he gone ahead with the performance.

ACCEPT played an hour-long set in Toronto, with drummer Christopher Williams, bassist Martin Motnik and some of the other members handling the vocal parts.

McMaster sang for ACCEPT at the October 20 concert at Penn's Peak in Jim Thorpe and stuck around for the two shows that followed, splitting vocals with Tornillo at both dates.

Fan-filmed video of the Patchogue concert can be seen below.

Earlier today, ACCEPT shared a few photos of the last couple of shows from the tour, and included the following message: We want to thank this amazing man and musician, Jason McMaster, who stepped in last minute to sing for a few shows without a rehearsal! Not only was he brave enough to fill in for our one of kind singer Mark, he did so with utmost professionalism and legendary showmanship!

"When Mark became ill, we were all concerned as to what do to, to keep the tour rolling for our US fans and family. Needless to say we worked around the clock to find a substitute who could step into this highly coveted role. Jason turned up and we have been blown away!

"Though Mark came back a couple of nights ago, both him and Jason decided to share the stage making the last 2 shows an epic moment in ACCEPT history! 2 killer front men at once!

"We are happy to announce that Jason will rock the stage with us for ONE more night!

"We want to thank him for his heroic courage, terrific presence and artistry!

"We had a ball, see you around brother!!

"We'd love to hear from people who were at the shows with both Mark and Jason… What did you like about it?

"And for those who want to catch this one off and extraordinary show in ACCEPT legacy, come down and join the fun! We play Debonair Music Hall NJ tonight."

ACCEPT's North American tour, featuring support from NARCOTIC WASTELAND, kicked off on September 29 in Nashville, Tennessee and is scheduled to conclude on October 29 in Columbus, Ohio.

GREAT NEWS! Mark is doing better and will be able to join us tomorrow again on stage in Patchogue, NY at Stereo...