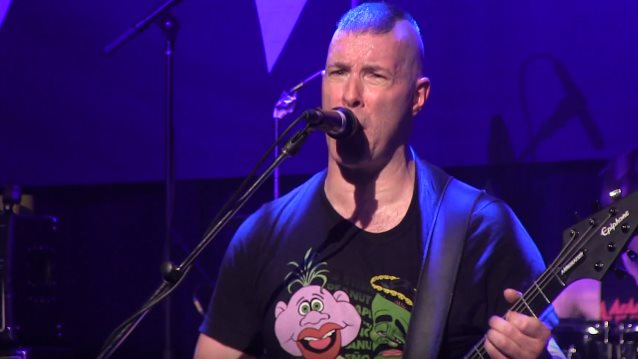 Fan-filmed video footage of Canadian thrashers ANNIHILATOR performing a brand new song called "Twisted Lobotomy" live for the first time on July 29 at the Nord Open Air festival in Essen, Germany can be seen below.

"Twisted Lobotomy" is expected to appear on ANNIHILATOR's upcoming follow-up to 2015's "Suicide Society" album, tentatively due at the end of October.

ANNIHILATOR guitarist and main songwriter Jeff Waters recently told Metal Wani about the band's forthcoming disc: "I think this is one of the best ones we've done. And it ended up probably being [that way] because I had a co-producer come in for the first part of the record and he also co-wrote all the music with me on the record. And that's our bass player Rich Hinks, our U.K. bass player. So that brought a huge kick in the butt to me. I think that livened me right up and just woke me up to a bunch of things. He made some comments about what he liked about the early ANNIHILATOR style and he kind of made it clear to me that I don't have to be one of these musicians that go back to some of their earlier successful albums and try to copy it, because that woud be the biggest mistake in the world. He kind of guided me there without actually getting me to just think, 'Okay, go back and do something like that.' He sort of went around that, pushed me to go around that, and the result was kind of like the first two records, the way I kind of recorded it all and the way the production went and the way some of the arrangements of the songs were put together. And by the end of the music writing, I realized, 'Holy shit! He just guided me to doing exactly what I should never have done, which is go back to the roots and try to pull off getting something almost as good as the first couple.' And I think that's exactly what we ended up getting."

Regarding the musical direction he had in mind when starting to write material for the new ANNIHILATOR album, Jeff said: "Unlike the last record, 'Suicide Society', I don't want to let the majority of my influences and the metal fan, metal musician side of me get the best of me on this record. 'Suicide Society' was a good record — I'll say good right in the middle; it wasn't crappy, it wasn't amazing, it was good — but I did realize later that I had just sort of said… When I was singing the record, for example, I would sing with a [James] Heltfield-wannabe kind of vibe on certain words, or the MEGADETH, [Dave] Mustaine-ish thing, or maybe even a Layne Staley- or Ozzy [Osbourne]-wannabe kind of thing. And it's not 'wannabe' — it's more like these are my four favorite singers other than [Rob] Halford and [Bruce] Dickinson, you know? And David Lee Roth… And Bon Scott. But I was more of a fan on the last record, musically and vocally, and that really came through — you can hear the influences and where I got everything from in my music history and influence. This one, I wrote down, 'Do not do the Hetfields, Mustaines, this and that. Go back to the 'King Of The Kill' record and the 'Alice In Hell' record.' Because, despite a guy named Randy Rampage being the singer on the 'Alice In Hell' record, fans that know of our early roots know of our demos that I sang on and knew that, many years before 'Alice In Hell' was recorded, songs like 'Alison Hell' and all these were on demo forms through the cassette-trading networks that the world had then, and that was kind of a more heavy, more original kind of vocal style that I did. And that went through into the first bunch of singers with ANNIHILATOR — my influence producing the vocals for these guys. It was, basically, 'Do this, 'cause this is what I would do.' And that was a key on this new record, as I was going to stay away from trying to be influenced by other singers — get back to my own thing, if there is such a thing — and I think I did that this time. And then the other thing was, well, musically, of course, was to just… If you write a riff and it sounds very SLAYER-ish, and you love it and you say, 'I don't care if it's a little SLAYER-ish. I love this riff,' you're gonna throw it in the garbage, and you're gonna write something that is more… [where] people would say, 'That's Waters-ish.' So that was really the main key. And the other one that I kind of broke the rule on, the third thing, I think, I said on the letter to myself, I guess, the notes, was that… 'Don't rely on catchy, commercial choruses,' because that becomes, in a songwriter sense, a very tempting thing. The catchier your choruses are, the more memorable they are; therefore, technically, you could call that the more commercial that is, the more accessible and memorable or whatever. So, throw that out the window and go back to what I was doing in the early days where I didn't give a damn about the choruses; it was about the whole song and not just about building around the chorus. 'Cause I got too easily sucked into that one for quite a few years now. This time I just said, 'Start with an intro,' 'Start with a solo thing,' 'Go to a verse,' 'Go to a pre-chorus,' 'Go to a chorus,' and make all those as good as I can and inch my way through it rather than basing everything around a catchy chorus. And half of that worked; the other half, I just came back to what I usually did. And the other half was just some really bizarre stuff, and that was kind of like the eary days."

As previously reported, ANNIHILATOR will tour Europe with TESTAMENT and DEATH ANGEL in November and December.

On January 27, ANNIHILATOR released "Triple Threat", a three-disc collection of the band's music in a trio of very different scenarios. The main disc comprised a set of ANNIHILATOR's classics performed acoustically, with Waters bringing together band members Aaron Homma and Richard Hinks, Vancouver drummer and friend Marc LeFrance plus Ottawa session player Pat Robillard. Recorded and mixed by Waters (with Marty Sobb),this quintet laid everything down live, off the floor and in single takes at Watersound Studios in Dunrobin, Canada during late May and early June, 2016, giving Waters one of the most challenging, satisfying and perhaps "electric" creative moments in his career.

"Suicide Society" was released in September 2015 via UDR Music.