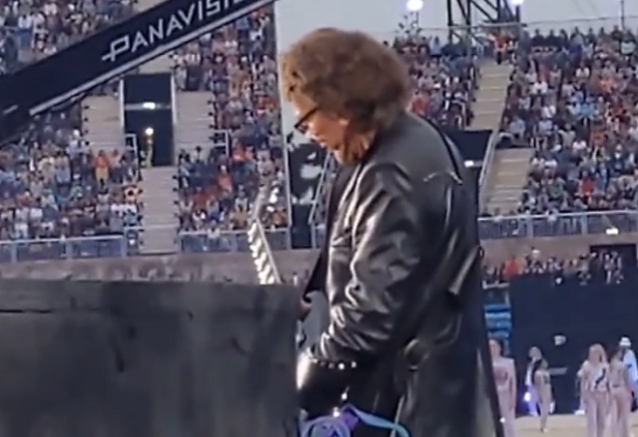 BLACK SABBATH guitarist Tony Iommi took part in the Commonwealth Games opening ceremony, which was held in his home city of Birmingham, England.

Iommi and acclaimed saxophonist Soweto Kinch led a "dream sequence" piece, titled "Hear My Voice", based on the lead track from the 2020 film "Trial Of The Chicago Seven" at the event on Thursday, July 28. After Tony and Soweto played an extended instrumental lead-in, they were joined by the City Of Birmingham Symphony Orchestra and a 700-strong community choir.

The ceremony took place at Alexander Stadium in front of an audience of more than 30,000, with the event also being broadcast live on BBC One and iPlayer to an estimated global television audience of one billion.

Headlining the ceremony was the new wave group DURAN DURAN, with additional appearances by some of the city's most celebrated artists under the musical direction of rapper, artist and educator Joshua "RTKal" Holness.

After the ceremony, Iommi's SABBATH bandmate Ozzy Osbourne tweeted: "@TonyIommi , I was really proud to see you tonight at the opening of the Commonwealth Games in our home town of Birmingham".

Earlier in the week, Iommi talked to BirminghamWorld about the pressure of performance for such a large audience.

"A billion people tuning in is a huge figure," he said. "It's going to be seen not just across the Commonwealth but throughout the world. We really have to do Birmingham proud.

"Representing Brum is a great honor and I'm bursting with pride to be doing it. I've flown the flag for Birmingham all of my life because it's my city and it's given me wonderful opportunities.

"I like to think that BLACK SABBATH helped to put Birmingham on the map musically, and it's great now that the Games ceremony will feature so many talented people from the city. It means a hell of a lot to me. But I have to admit, there'll be a bit of stage fright on the night. I haven't played onstage at a big show for five years since the final SABBATH show in February 2017."

The Birmingham 2022 Commonwealth Games will see around 4,500 athletes from 72 nations and territories compete in 19 sports and eight para-sports across 15 competition venues from July 28 July until August 8.

For music fans ... this was our view of Tony Iommi last night at the Commonwealth Games Opening Ceremony! Great to have such a close view of a guitar legend, Brummy born and bred. He waved and smiled at our choir 😊😊 (Sorry about the concrete base in the video; I was sat right behind the flagpole!) @

Posted by Language for Fun Lichfield on Friday, July 29, 2022

Great to see Black Sabbath legend Tony Iommi at the Commonwealth games opening cermony - 1hr26mins in if you watch on https://t.co/uc2Dvl9VzL via @bbciplayer#TonyIommi#BlackSabbath#CommonwealthGames2022pic.twitter.com/uilXL63n5a

. @TonyIommi, I was really proud to see you tonight at the opening of the Commonwealth Games in our home town of Birmingham pic.twitter.com/1YyOTNdvmd