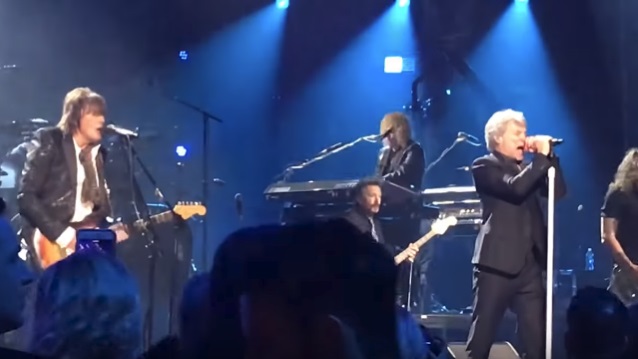 Guitarist Richie Sambora rejoined BON JOVI on stage Saturday night (April 14) at the Rock And Roll Hall Of Fame induction ceremony in Cleveland, marking his first performance with the band since 2013. Also appearing with the group was bassist Alec John Such, who hadn't played with BON JOVI since a one-off performance in 2001. They performed several crowd favorites, including "Livin' On A Prayer", ''You Give Love A Bad Name" and "It's My Life".

Sambora, who joined BON JOVI in 1983 and co-wrote most of the group's iconic hits over the following three decades, hadn't shared the stage with the band since he left the "Because We Can" tour five years ago. Such was fired from the group in 1994, reportedly because of his poor live performances.

Radio personality Howard Stern inducted BON JOVI with a profanity-laced speech during which he joked that Jon Bon Jovi single-handedly "destroyed the ozone layer in the 1980s with hairspray."

"I'm very proud to be inducted with these guys," said Sambora during his acceptance speech. "If I wrote a book, it would be [called] 'The Best Time I Ever Had'."

"I've been writing this speech many days, in many ways — some days, it's the thank you speech, some days the fuck you speech," Jon Bon Jovi said. "It's about time — that has been the theme of my weekend. I thank my lucky stars for the time I got to spend with each of you," he said, looking at his bandmates. "Tonight the band that agreed to do me a favor stands before you so I can make this reality a dream."

Backstage after his band was inducted into the Rock Hall, Jon was asked by a reporter if Richie is coming back to BON JOVI. "I think Richie's got his own career," he replied. "Maybe you'll have to ask him." He tossed it over to Sambora, who replied: "If he asks me..."

The event took place at Cleveland's Public Auditorium, with an edited version of the ceremony airing May 5 on HBO at 8:00 p.m.