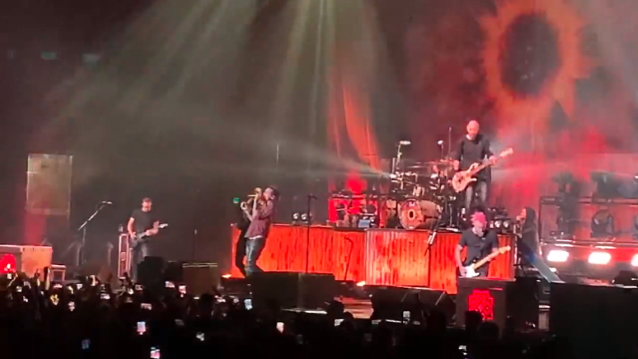 Watch BUSH's GAVIN ROSSDALE Team Up With BREAKING BENJAMIN For Cover Of ALICE IN CHAINS' 'Would?'

BUSH singer Gavin Rossdale joined BREAKING BENJAMIN on stage last night (Saturday, February 29) at the Reno Events Center in Reno, Nevada to perform a cover of the ALICE IN CHAINS classic "Would?" Video footage of the rendition, courtesy of the Reno rock station Rock 104.5, can be seen below.

Back in September, Rossdale said that BUSH's new album, "The Mind Plays Tricks On You", would arrive in early 2020. The disc was recorded at a Los Angeles studio with film composer Tyler Bates, who previously worked with Marilyn Manson.

BREAKING BENJAMIN is currently on a co-headlining tour with KORN. The Ben Burnley-fronted act is touring in support of its new compilation album "Aurora", which features reimagined versions of its songs.