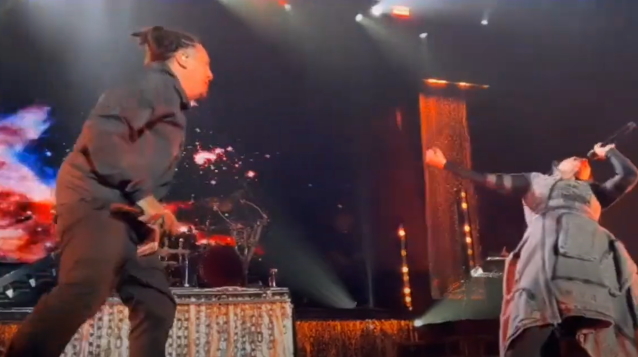 Watch: EVANESCENCE Joined By P.O.D.'s SONNY SANDOVAL For 'Bring Me To Life' Performance In Spokane

P.O.D. frontman Sonny Sandoval joined EVANESCENCE on stage this past Tuesday (September 13) at Spokane Arena in Spokane, Washington to perform EVANESCENCE's breakthrough 2003 hit "Bring Me To Life". Video of his appearance can be seen below.

Last month, "Bring Me To Life" experienced a resurgence 19 years after its original release. The song, which initially reached No. 5 on the U.S. Billboard Hot 100 and was EVANESCENCE's first U.K. No. 1 single, landed at No. 1 on the U.S. iTunes chart.

This past February, EVANESCENCE's music video for "Bring Me To Life" surpassed one billion views on YouTube. The Philipp Stölzl-directed clip, which was uploaded to YouTube in December of 2009, was filmed in Romania in January 2003. It features singer Amy Lee in a night gown and barefoot, in her room, inside a tall building in the city at night. The rest of the band is playing on a higher floor of the building.

Last year, Amy spoke to Germany's Sonic Seducer about the lyrical inspiration for "Bring Me To Life".

In March 2021, Lee told Alternative Press that EVANESCENCE's original record label Wind Up threatened not to release the group's debut album, "Fallen", if she and her bandmates didn't add a male voice to lead single "Bring Me To Life" to make it more palatable for radio.

Thank you @evanescence for having me up last night! #payableondeath#evanescencepic.twitter.com/eWrE1WVkQL