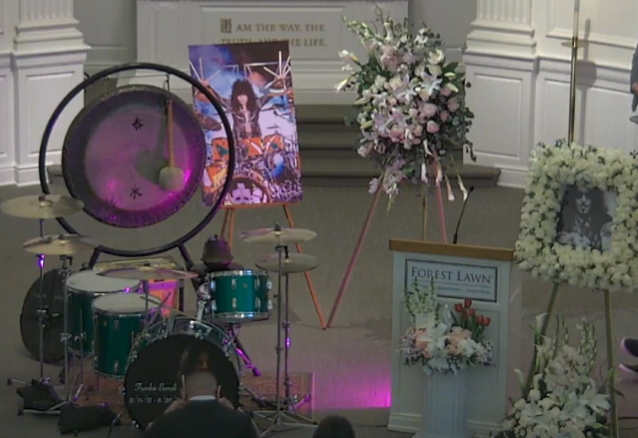 A public funeral service for QUIET RIOT drummer Frankie Banali was held on Monday, November 15 at 2:30 p.m. at Forest Lawn Memorial Park in Hollywood Hills, Los Angeles, California. The entire event was livestreamed to the public and a playback is available for viewing below.

Banali, who joined QUIET RIOT in 1982 and played on its breakthrough album, 1983's "Metal Health", died in August 2020 after a 16-month battle with pancreatic cancer. One day after his passing, Frankie's wife Regina spoke about plans for his memorial service during an appearance on SiriusXM's "Trunk Nation With Eddie Trunk". She stated at the time: "Funnily enough, he had already bought and paid for and planned his entire services at Forest Lawn [cemetery in Los Angeles] before his [cancer] diagnosis. He was gonna get the same kind of funeral that Ronnie [James Dio] got and Jimmy Bain and all those funerals that we've been to many times. He was saying we're gonna rent the [legendary West Hollywood restaurant and bar] Rainbow and have laminated passes and [have a] send-off in the rock and roll way that he arrived in L.A.," she continued. "He had a lot of history with the Rainbow."