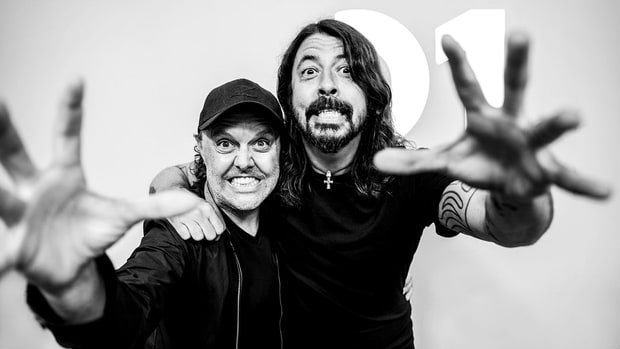 Lars Ulrich interviewed FOO FIGHTERS leader Dave Grohl on a recent episode of "It's Electric!", the METALLICA drummer's online radio show on Apple Music's Beats 1. During the chat, which can now be seen in its entirety below, Grohl told the the story of how FOO FIGHTERS became Mick Jagger's backing band on "Saturday Night Live" in 2012; he discussed his stint in THEM CROOKED VULTURES, Grohl meeting Lemmy Kilmister, his run-in with Liam Gallagher and his friendship with Paul McCartney.

This is not the first time Ulrich and Grohl have interviewed each other. Back in September 2008, Dave and FOO FIGHTERS drummer Taylor Hawkins sat down with all four members of METALLICA for "The World Premiere of Death Magnetic", a FMQB radio special which was broadcast live from METALLICA headquarters in San Rafael, California.

Launched on May 7, "It's Electric" is an unscripted, unfiltered weekly window into the mind of Ulrich. Hear music that excites this great Dane, as well as chats with artists who inspire him... all wrapped in magnificently mindless banter!