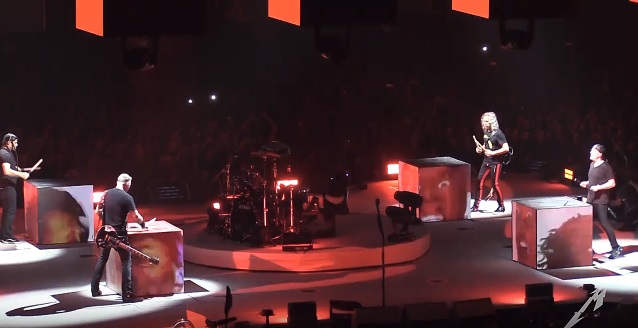 METALLICA played on March 31 at Wiener Stadthalle in Vienna, Austria as part of the second European leg of the band's "WorldWired" tour. The two-hour show included a four-man drum jam that first made an appearance at METALLICA's Mexico City gigs in March 2017 within the new song "Now That We're Dead". During the section where drummer Lars Ulrich, from the center of the stage, played some tribal tom grooves, the other members started banging on individual sets of toms, with Ulrich stepping out to join them. Check out professionally filmed video footage below.

"I know it's been on [frontman James] Hetfield's laundry list for some time to experiment with a drum piece," Ulrich told Newsday. "He's always been a bit of a closet drummer, so he suggested that we all somehow stitch together a drum interlude."

METALLICA played 12 shows in Europe since early February and has another 12 dates booked between now and mid-May.