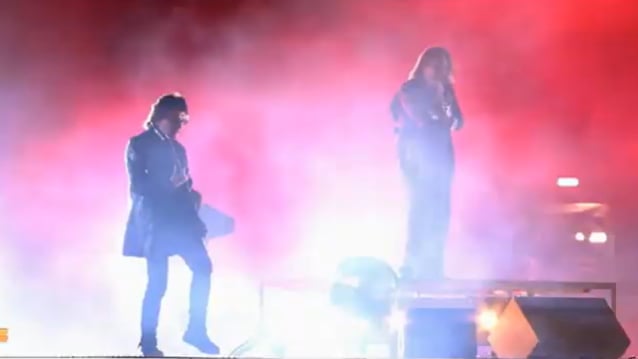 BLACK SABBATH singer Ozzy Osbourne and guitarist Tony Iommi reunited earlier today (Monday, August 8) in their original hometown of Birmingham, England to perform the band's classic song "Paranoid" — preceded by a truncated version of "Iron Man" — at the closing of the city's Commonwealth Games. They were joined by two musicians from the band's final tour, Adam Wakeman, who played bass and keyboards, and drummer Tommy Clufetos.

A few years ago, Osbourne said that he was open to the possibility of a SABBATH reunion at the Commonwealth Games, telling ITV that it "would be fantastic" to play at the the opening ceremony for the 2022 Games. "With BLACK SABBATH or on my own," he said at the time.

The ceremony took place at Alexander Stadium in front of an audience of more than 30,000, with the event also being broadcast live on BBC One and iPlayer to an estimated global television audience of one billion.

Headlining the ceremony was the new wave group DURAN DURAN, with additional appearances by some of the city's most celebrated artists under the musical direction of rapper, artist and educator Joshua "RTKal" Holness.

After the ceremony, Ozzy tweeted: "@TonyIommi , I was really proud to see you tonight at the opening of the Commonwealth Games in our home town of Birmingham".

Earlier that week, Iommi talked to BirminghamWorld about the pressure of performance for such a large audience.

"A billion people tuning in is a huge figure," he said. "It's going to be seen not just across the Commonwealth but throughout the world. We really have to do Birmingham proud.

"Representing Brum is a great honor and I'm bursting with pride to be doing it. I've flown the flag for Birmingham all of my life because it's my city and it's given me wonderful opportunities.

"I like to think that BLACK SABBATH helped to put Birmingham on the map musically, and it's great now that the Games ceremony will feature so many talented people from the city. It means a hell of a lot to me. But I have to admit, there'll be a bit of stage fright on the night. I haven't played onstage at a big show for five years since the final SABBATH show in February 2017."

Last year, Iommi was asked by The Mercury News about the possibility of another BLACK SABBATH tour at some point in the not-too-distant future. He laughed and replied: "I wouldn't think so. But it's a strange thing with SABBATH — how many times we thought we were with Ozzy, then we had [Ronnie James] Dio, then back to Ozzy, then Dio again, and then Ian Gillan and Tony Martin and Dio and back to Tony Martin. It's gone backwards and forwards at different stages. So, you just never know.

"I think it's highly unlikely that we'd get back onstage again," he said. "It certainly wouldn't be touring. We'd only do so many shows, if anything.

"I would like to play with the guys again. But I can't see that happening.

"The reason we stopped touring in the first place was basically my fault, because I had to be careful of my health," Iommi explained. "When you book a tour — and it's always an 18-month tour — it doesn't sound a lot when you talk about it at first. But when you get out there, and you are touring, it's bloody hard work. And it wasn't particularly good for my health, because of the blood cancer. So, I said, 'Look, you know, this should the last tour, I think.' But I really do miss it. I really miss playing onstage. I miss seeing the audience."