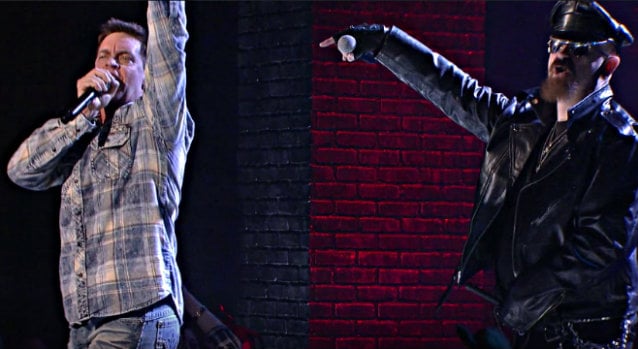 The eight-episode season features celebrities dishing on a cherished memory linked to an iconic song and then performing that song with the Comedy Jam Band in front of a live audience.

This week's episode saw Halford join forces with Jim Breuer to perform the PRIEST classic "You've Got Another Thing Coming".

You can now watch the performance below.

CC.com features preview clips and highlights from each episode, plus a web-exclusive after show, "The After Jam", hosted by show creator Josh Adam Meyers. Full episodes of "The Comedy Jam" will be available the day of premiere on the Comedy Central app and CC.com. Highlights and exclusives from "The Comedy Jam" will also be available in the CC app and the Comedy Central channel on Snapchat Discover. Fans can tweet about the series using the hashtag #ComedyJam.

"The Comedy Jam" was filmed at the Fonda Theatre in Hollywood. The eight-episode weekly series is based on the special that aired in August 2016 and was born from one of the hottest live shows in Los Angeles. Created by Josh Adam Meyers, "The Comedy Jam" is produced by Ugly Brother Studios and Tenth Planet and is executive-produced by Meyers, Mike Duffy, Tim Duffy and Joel Gallen. Gallen directed all eight episodes. Jordan Ellner, Gary Mann and Ryan Moran are the executives in charge of production for Comedy Central.