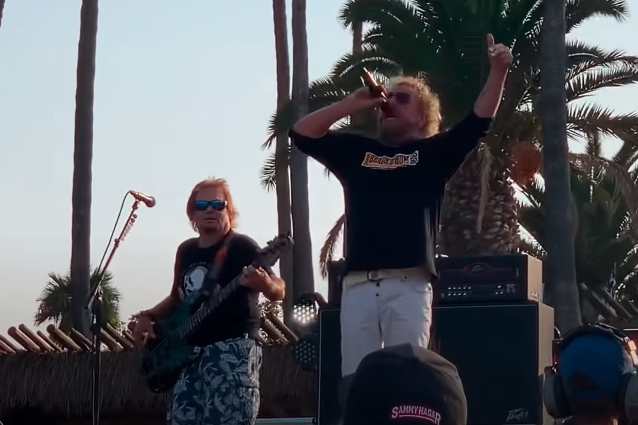 Former VAN HALEN members Sammy Hagar and Michael Anthony paid tribute to Eddie Van Halen on Thursday (October 8) at Hagar's annual birthday bash, which was moved to Catalina Island in California due to the coronavirus pandemic. Prior to launching into a rendition of the VAN HALEN classic "Right Now" with the rest of THE CIRCLE band, Hagar led the audience in a moment of silence as they stood quietly for 20 seconds in memory of the late guitarist, who died on on Tuesday (October 6) at the age of 65 following a long cancer battle.

"We're about to do a very special song that means a lot to Michael Anthony and myself," Sammy told the crowd. "So I would like to ask for just a quick moment of silence, please. And you know why."

Check out video footage of the performance below (courtesy of YouTube user "Trojanvitty").

A day earlier, Hagar and Anthony filmed a short video message in which they talked about Van Halen's passing.

"For Mike and I, it was just like getting hit by a freaking Mack truck," Sammy said about learning of Eddie's death. "It kind of took the wind out of the sails. I just wanna say that I'm kind of devastated. A VAN HALEN song never felt so hard to sing and play in my life."

Anthony added: "It was hard. It's very surreal right now. It hasn't sunk in yet."

Anthony said: "We have the music, if nothing else."

Eddie and Alex formed VAN HALEN in 1972 in Pasadena, California, with David Lee Roth on lead vocals and Anthony on bass.

VAN HALEN and Anthony had not been on good terms for more than a decade, with Anthony not invited to join the reunion with Roth that began in 2007. The subsequent two tours and studio album, "A Different Kind Of Truth", featured Eddie's son Wolfgang on bass.

Hagar's 2020 birthday bash was professionally filmed and recorded and will be available everywhere as a pay-per-view stream on October 17 in HD and 4K via nugs.tv. The concert took place on a specially erected stage on the beach of Two Harbors, Catalina Island in California and was captured by 7 Cinematics, the world's foremost producers of live-music broadcasts and video streams, exclusively for the pay-per-view event. The audience watched the show via the boat-in, a limited amount of socially distanced chartered boats that purchased mooring reservations in the bay at Two Harbors.