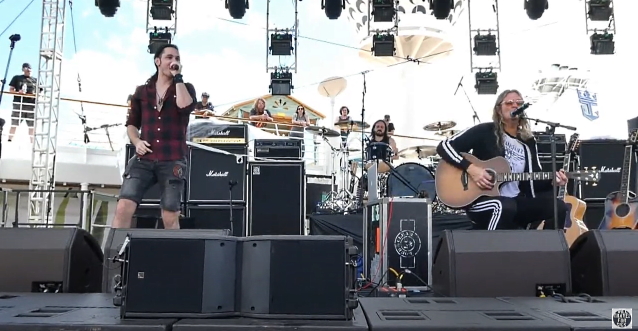 Video of WHITESNAKE members Joel Hoekstra and Dino Jelusick performing the band's classic song "Here I Go Again" on February 12 aboard this year's Monsters Of Rock cruise can be seen below (courtesy of YouTube user WILL TRAVEL FOR GIGS).

Last July, WHITESNAKE announced that it had enlisted Croatian singer/multi-instrumentalist Jelusick for its upcoming tour. Jelusick is a member of multi-platinum selling band TRANS-SIBERIAN ORCHESTRA and was previously part of DIRTY SHIRLEY (with George Lynch),ANIMAL DRIVE and recorded with many others. Dino has been singing, touring and recording since the age of five. Other than being a frontman, his main instrument are keyboards but he also plays bass, guitar and drums. He finished music academy and did theater work.

Asked in a recent interview with Antihero Magazine what Dino's role will be on WHITESNAKE's final tour, the band's leader David Coverdale said: "He's going to be the way I have two guitar players.

"I've always seen WHITESNAKE as an orchestra," he explained. "I don't see it as a band-band. I don't want two guitarists playing exactly the same song, or just harmony guitars, I want two opposing… you've got the incendiary Joel Hoekstra, entirely different to the electrifying Reb Beach. And this is not to overwhelm Michele [Luppi, WHITESNAKE keyboardist]. Michele's totally secure. I adore him and what he brings to WHITESNAKE.

"So, I think it's going to be fantastic," Coverdale added. "I'm going to have an orchestra of keyboards for a lot of songs on WHITESNAKE which are big epics, that make them even more musically orchestrated without having an orchestra on stage with us.

"I mean, the guy's great, I can't wait to sing with him. I already have three singers who are good enough to be frontman singers, with Michael Devin and Michele Luppi, and Reb Beach; they are really great singers. What's wrong with having another one? And I think he's a super guy. He has his challenges legally at the moment, but talent, belief, and courage will always win. And I can't wait for us to start rehearsals, I really can't. It's got to be exciting to me and adding another spice to an already good cocktail."

Asked if he is in any way a bit sad to know that this will be probably WHITESNAKE's farewell tour, Dino said: "Well, no. Every band has an expire date. WHITESNAKE has been going for 40, 50 years now. More than 40 years — since '78 or '77, when the first album came out. But I'm proud to be the last WHITESNAKE member ever. When you see the guys that played in this band. You had Jon Lord. You had Don Airey on keyboards. You had Timothy Drury, Michele Luppi and myself. It's five keyboardists of WHITESNAKE. There were a couple of more playing live — yeah, Paul Mirkovich was in 1994, playing that leg. Yeah, there were a couple of more. But, yeah, it's definitely a beautiful part of history in the making."

When Jelusick's addition to WHITESNAKE was first announced, David said in a statement: "I am absolutely delighted to welcome the extremely gifted Dino Jelusick to WHITESNAKE. We've had our eyes and ears on him since we played Zagreb together two years ago. You're going to love him!"

Dino said he has been influenced by WHITESNAKE and Coverdale from an early age.

"I am beyond honored to be part of one of my favorite bands of all time," he said. "To get the phone call from David Coverdale is something every singer and musician of my generation can only dream of; it still feels completely surreal. I cannot wait to start hitting the road with WHITESNAKE and, as the great DC said to me himself, to give a piece of my identity to the sound of this iconic band."