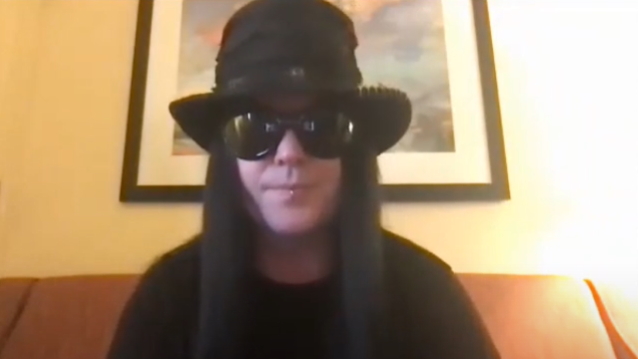 WEDNESDAY 13 Says He Last Heard From JOEY JORDISON A Month Before His Death: 'It Was Just A Weird, Out-Of-The-Blue Thing'

In a new interview with the "On The Road To Rock" podcast, Wednesday 13 spoke about his Jordison tribute and reflected on his relationship with Joey, saying: "Every night we have a little part in the set that I tell the story and talk about Joey. It's weird — there's some nights I don't talk as much 'cause I get choked up. I'm, like, 'Go into it.'

"It's been a tough thing to swallow, knowing he's not here. But we got to do that second [MURDERDOLLS] record ['Women And Children Last'], which is my favorite — killer songs on that record.

"When that record ended, we kind of ended on ugly terms and stuff — I won't get into it — but we made up in 2018. We had two days off in Iowa and I went to his house. I brought the whole band over. We had a barbecue, we hung out, we made up and we had been talking, 'Hey, let's do MURDERDOLLS again. Let's do MURDERDOLLS again.' And literally a month before he died, he texted me, just out of the blue, watching 'Texas Chainsaw Massacre'. From his bed, he was, like, 'I just woke up and this was on.' He was just giggling watching The Hitchhiker. And he wrote me a message and said, 'Dude, I'm with you, brother. Horns up. Go out there and destroy it.' It was just a weird, out-of-the-blue thing. So I don't know what was going on with him then. And then I get the news [about his death]. I literally woke up and I had a bunch of messages going, 'Did you hear? Did you hear?' And I knew it.

"So, yeah, man, it's been a weird thing," Wednesday 13 added. "But getting to go out and play these songs and seeing people's reaction has been a healing thing. I needed that."

Jordison — who played guitar for MURDERDOLLS — died "peacefully in his sleep" last July of an unspecified cause. He was 46 years old.

MURDERDOLLS had been inactive since completing the touring cycle in support of the aforementioned "Women And Children Last", which came out in August 2010 via Roadrunner Records.