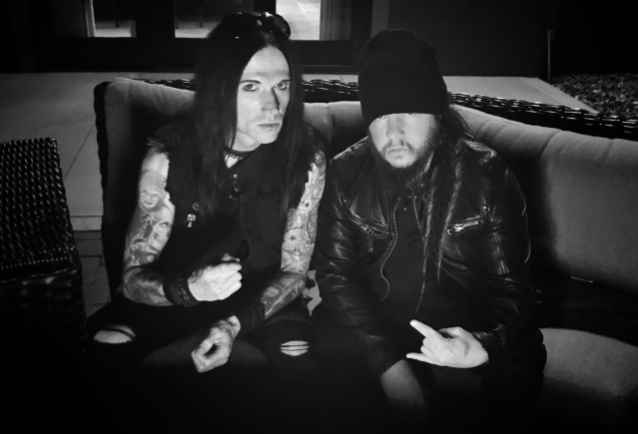 On a recent episode of the "Talk Louder" podcast, hosted by veteran music journalist "Metal Dave" Glessner and lifelong hard rock/metal vocalist Jason McMaster (DANGEROUS TOYS), heavy horror punk icon Wednesday 13 spoke about the passing of his one-time MURDERDOLLS bandmate, original SLIPKNOT drummer Joey Jordison. Asked if Joey's July 2021 death came as a shock to him or if he was aware of any underlying health issues that would have caused Jordison to die at the age of only 46, Wednesday said (as transcribed by BLABBERMOUTH.NET): "Honestly, I don't know anything of him being in bad health. I know he had his health problems that he had talked about online over the past couple of years, but as far as that being anything that was putting him toward death or anything, I don't think anybody had that type of expectations.

"No one had been in touch with him at all, so when we all heard, it was all a shock," Wednesday continued. "I think he had recently just split up with his girlfriend, so he may have been living by himself for the first time [in] a long time. No one mentioned COVID. I have no idea. It was literally just 'he died in his sleep,' and that's the news they'd given to everybody. I hope that it's that simple and it was that easy for him to go out and just peaceful. But I have no idea — I have no idea what was going on with him. And everybody… When he passed, I had some people reach out to me, 'What happened?' I'm, like, 'I don't know.' A lot of people thought that he and I spoke constantly. I don't know anybody that he was in touch with. He was really like a recluse. So I don't know if we'll ever find out exactly other than just what they've said. And that's probably all we're ever gonna hear."

More than a year ago, Joey's SINSAENUM bandmate Frédéric Leclercq blasted TMZ for sharing the audio of the 911 call placed by the former SLIPKNOT drummer's ex-girlfriend after she found him dead. On July 29, 2021, the tabloid site posted the two-and-a-half-minute phone call in which the ex-girlfriend — who continued taking care of Joey's bills and maintaining his house in Iowa even after their split — could be heard getting very emotional when she went to his home to check on him after he hadn't returned her messages. During the call, she indicated that Joey was "a really bad alcoholic" with "health issues," and she revealed that the motion sensors on the house hadn't detected any activity in days.

Wednesday 13 previously discussed Jordison's death in an April 2022 interview with the "On The Road To Rock" podcast. At the time, he said: "It's been a tough thing to swallow, knowing he's not here. But we got to do that second [MURDERDOLLS] record ['Women And Children Last'], which is my favorite — killer songs on that record.

"When that record ended, we kind of ended on ugly terms and stuff — I won't get into it — but we made up in 2018. We had two days off in Iowa and I went to his house. I brought the whole band over. We had a barbecue, we hung out, we made up and we had been talking, 'Hey, let's do MURDERDOLLS again. Let's do MURDERDOLLS again.' And literally a month before he died, he texted me, just out of the blue, watching 'Texas Chainsaw Massacre'. From his bed, he was, like, 'I just woke up and this was on.' He was just giggling watching The Hitchhiker. And he wrote me a message and said, 'Dude, I'm with you, brother. Horns up. Go out there and destroy it.' It was just a weird, out-of-the-blue thing. So I don't know what was going on with him then. And then I get the news [about his death]. I literally woke up and I had a bunch of messages going, 'Did you hear? Did you hear?' And I knew it.

"So, yeah, man, it's been a weird thing," Wednesday 13 added. "But getting to go out and play these songs and seeing people's reaction has been a healing thing. I needed that."

MURDERDOLLS had been inactive since completing the touring cycle in support of the aforementioned "Women And Children Last", which came out in August 2010 via Roadrunner Records.

Had a great Memorial Day weekend and ran into an old friend. It’s been 7 years since we’ve all seen each other and we...