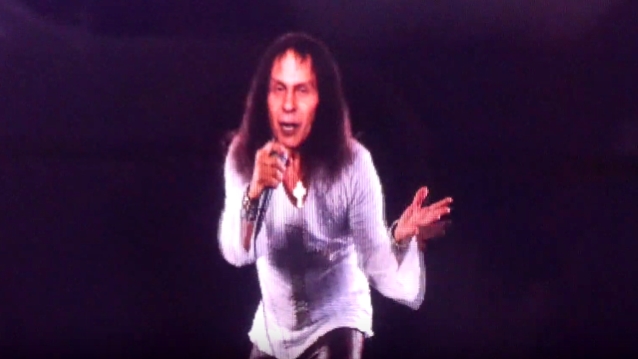 Ronnie James Dio's former wife and longtime manager Wendy Dio spoke to Brazil's Kazagastão about a possible return of the hologram of the legendary metal singer.

"[The hologram] was well received sometimes, sometimes not; it all depends on the people," she said (as transcribed by BLABBERMOUTH.NET). "The problem with the hologram, and it's great — and I won't say never again — but it costs so much money, you can only go into certain venues because of the height of it and the size of it. It's too expensive to travel, so therefore we couldn't come to Brazil, couldn't come to South America, couldn't go to Japan, couldn't go to Europe with it. So it limits you so much.

"So we are going out next year in March — the DIO band will go out again — but this time I found an ISO film, a 17-camera shoot, there's an ISO one of Ronnie only. So we took that, and we're making this with special effects. So it won't be a hologram — it'll be a film of Ronnie himself with the DIO live band and special effects. So we're working on that. And that we can take anywhere. So we're hoping to come to Brazil next year."

Last month, Wendy told Ultimate Classic Rock that the Ronnie James Dio hologram was "on hold. I don't know if we're going to do that again or not," she said. "We went out, and we tried it — we did it.

"There's still talk about doing the hologram," she continued. "I don't know. I think that there's so much more that's come along developing-wise [as far as technology]. I just think that the fans would prefer to see Ronnie as being really Ronnie instead of a hologram."

The Dio hologram production uses audio of Ronnie's live performances from throughout his career, with the DIO band playing live, consisting of Craig Goldy on guitar, Simon Wright on drums and Scott Warren on keyboards, along with Bjorn Englen on bass. Also appearing with them are Owens and LYNCH MOB frontman Oni Logan.