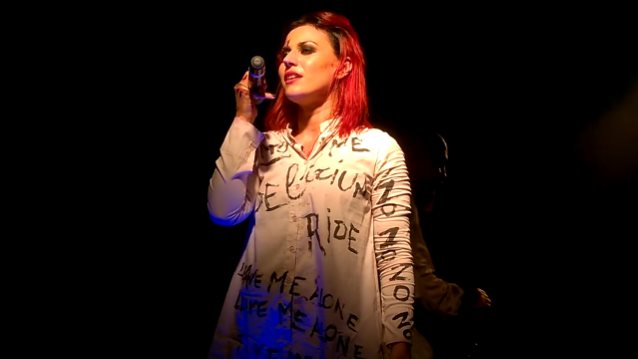 On November 13, vocalists Andrea Ferro and Cristina Scabbia of Italian heavy rockers LACUNA COIL were interviewed by the radio show "Louder" with Ore B on Scratch Radio in Birmingham, England. You can now listen to the chat below.

Asked if she ever discussed the role of women in metal and how they present themselves on stage with LACUNA COIL's former touring mates in BUTCHER BABIES, Cristina said: "To be honest, we never talked about it. All my colleagues are pretty strong personalities, even if they are just translating their characteristics on stage."

She continued: "I honestly never compare the stage appearance, because everyone is different, and you just have to be comfortable with yourself. No matter how you are — no matter if you're more an exhibitionist, or you're more reserved, or you like more to show femininity, or the other way around. I personally like to show a lot of energy, because I am a type of person like that. I'm very energetic [and] always positive. I sometimes define myself as the Tasmanian Devil, 'cause I'm always hyper on everything. So it would be weird for me to be on stage and stand still and to be the diva of the situation, because it's not me. I like to move. I like to be like one of the guys and not to be the one that stands out. And we made it pretty clear from a lot of years now, we all want to be in the spot. I don't want to be in the spot alone. I want LACUNA COIL to be in the spot. That's why I consider myself a tomboy. [Laughs] Also because, I mean, life on tour is not for every woman on earth. You just have to be easy and kind of adapt to a lot of things that are not exactly comfortable for a so-called regular woman."

Asked if they ever had a discussion within the band about what constitutes a "sexy" image either for guys or for girls, Andrea said: "No, we never talk about it. I think sexuality is something that it's there in you. You can't really pretend you're sexy if you're not. There's something inside you that makes you attractive to some people, and I think it's different for every person. People like certain more explicit things, people like more see-through-the-glass kind of things. It depends on your flavor. So we never really… We mostly try to have a good look for the band that everybody looks good in his own way. You can't have the band being all the same. You need bands to have a compact image, but also with different personalities. We tried in the past different ways, because sometimes people [weren't] comfortable wearing the same things as someone else, because they'd rather see themselves with a different kind of clothes. So we always try to study an image that can work for the band as well as for every personality in the band."

Addd Cristina: "I think that confidence is sexy. However you look, you don't really need a mini skirt to be sexy, because, I mean, if you're not comfortable wearing that skirt with high heels, you're gonna look ridiculous, even if you're wearing a skirt with heels. So I think that showing confidence and feeling good in your skin, it's already sexy, to me."