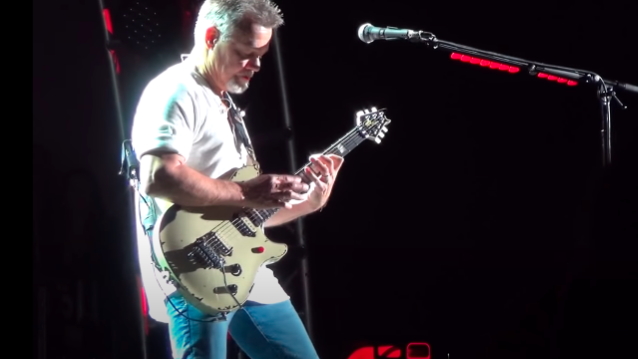 Where Did EDDIE VAN HALEN's Finger-Tapping Technique Come From? CHRIS HOLMES Weighs In

Former W.A.S.P. guitarist Chris Holmes, who grew up in the same Pasadena, California neighborhood as Eddie Van Halen, spoke to Canada's The Metal Voice about the origins of Eddie's two-handed tapping technique.

"I took lessons from [Eddie's lifelong friend] Terry [Kilgore] probably, say, '74 or '75. And I was painting a house in La Cañada at the time, and there was a guy [that] had gold records on the wall. It was [CANNED HEAT guitarist] Harvey Mandel's house. And I never met him, but I met his wife. We were painting [their house]. And I told Terry, 'Hey, there's this guy Harvey Mandel. Who's Harvey Mandel?' And Terry says, 'You know him?' I go, 'I don't know him, but I know where he lives. I'm painting his house.' And Terry goes, 'Could you ask him if I could meet him?' I guess he's some special jazz guitar player or whatever. So I asked Mandel's wife if I could give Terry's number to him, and Harvey called him, and Terry went up and met him and learned some tricks from him, and he learned to finger tap. Terry was doing that as one of the lessons. And about maybe a month later, Van Halen was doing it. I think that's where the finger tapping comes around — from Harvey Mandel."

"I've heard Ed say different stories [about where he got it from], but that's where I think he [picked it up]," Chris added.

According to Holmes, Terry and Eddie were both influenced by each other, as well as by other players.

"Terry and Ed were guitar rivals around town," Chris said. "They were friends. And Terry had a certain style. Some of it I'm not saying Ed stole; Ed just played like [him]. Everybody stole everybody's tricks or licks or whatever. Some of the early style that Ed had, a bit of it came from Terry."

DEEP PURPLE's Ritchie Blackmore reportedly claimed that he had seen Mandel using tapping onstage as early as 1968. DOKKEN guitarist George Lynch corroborated this, mentioning that both he and Van Halen saw Mandel employ "a neo-classic tapping thing" at the Starwood in West Hollywood during the 1970s. Mandel used extensive two-handed tapping techniques on his 1973 album "Shangrenade".