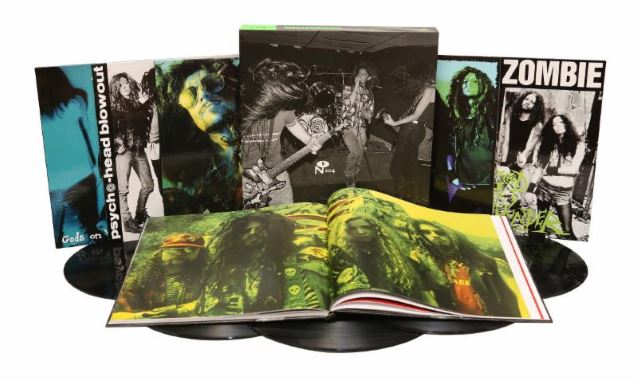 This week marks just one month left until the highly anticipated release of Numero Group's "It Came From N.Y.C." — the quintessential resurrection of WHITE ZOMBIE's eternally out-of-print early EPs and LPs. This set is the most exhaustive attempt so far to document the band's wondrously ugly birth. Get reintroduced to WHITE ZOMBIE as New York noise-rock, a grotesque creation that clawed and threatened its way to crossover metal glory.

Today, you can watch a never-before-seen unboxing video featuring a lucky set of hands rifling through the vinyl edition of the set. What you see inside is just a taste of what you can expect from this painstakingly-arranged media documentation of WHITE ZOMBIE's formative years.

Years before Beavis and Butt-head headbanged "Thunder Kiss '65" and "More Human than Human" into the eternal rock video canon, there was primordial WHITE ZOMBIE — a diabolically loud by-product of Manhattan's underground rock scene, born of art-school rendezvous and squalid apartment circumstance. On June 3, 2016, Numero resurrects WHITE ZOMBIE's eternally out-of-print early EPs and LPs as "It Came From N.Y.C." This set is the most exhaustive attempt so far to document the band's wondrously ugly birth. Get reintroduced to WHITE ZOMBIE as New York noise-rock, a grotesque creation that clawed and threatened its way to crossover metal glory.

Spread across five LPs or three compact discs, all 39 tracks have been remastered by WHITE ZOMBIE guitarist J. Yuenger and packaged alongside the original lurid artwork. The accompanying 108-page book painstakingly documents WHITE ZOMBIE's punishing progression through scores of unpublished photos, period discography, a T-shirtography, and tales from the terrifying early years that stitch together the sordid story of a band whose true power eclipsed its mainstream heyday.

"It Came From N.Y.C." package details:

The history of WHITE ZOMBIE came up when Rob Zombie was asked to comment on the publication of "I'm In The Band", a memoir from former WHITE ZOMBIE bassist Sean Yseult, who is also Rob's former girlfriend.

He added, "Everybody likes to make up stories which aren't true. I don't think that's fair. Ivan left the band, John Tempesta came in and the band sounded better than ever, we kept playing and made bigger records and did more tours so I don't see how that had anything to do with it."

In a 2015 Artisan News interview, Sean confirmed that Rob "hasn't spoken to any of [the other former members of WHITE ZOMBIE] since the band broke up."

WHITE ZOMBIE's 4-CD/1-DVD box set "Let Sleeping Corpses Lie" was released in November 2008 via Geffen/UMe. The CDs brought together for the first time all 64 original studio recordings released by the band led by Rob Zombie during its 1985-1996 career. The DVD offered nine music videos, 10 live performances, and some hidden gems.

Yuenger told Crawdaddy! about "Let Sleeping Corpses Lie": "They sent me and Sean mockups, like, two days before the release date. There was such little thought put into it. None of the photos were credited. There were no liner notes, which are essential for something like that. I mean, the band had such an interesting story, how could you not have liner notes? I hear about it all the time from fans. They're happy that the super rare early records are on there, that's cool for them to hear, but the packaging sucks. Sean's got all kinds cool shit — photos and flyers and stuff that they could have put in there." 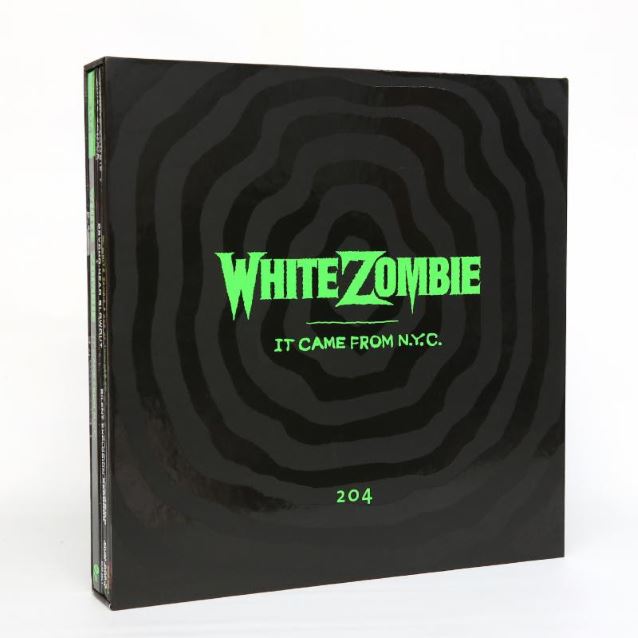