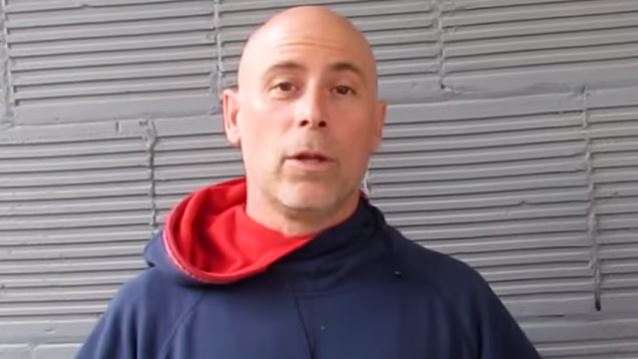 Former ANTHRAX and current ARMORED SAINT vocalist John Bush was interviewed by rock journalist Mitch Lafon for a recent edition of the "One On One With Mitch Lafon" podcast (Facebook page). You can now listen to the chat using the Spreaker widget below. A couple of excerpts follow (transcribed by BLABBERMOUTH.NET).

On his departure from ANTHRAX in 2005 after a 13-year stint with the band:

"It was definitely not one of the best-handled situations in the world. I mean, we were doing a tour of South America, but it already had been leaked that the reunion [with singer Joey Belladonna] was gonna happen, and, of course, I knew, but we never had, like, an official conversation about it. So, we were doing interviews in South America on this tour, and people were asking about the reunion, and then bandmembers were, like, 'What are you talking about? What are you talking about?', and kind of making the journalists feel stupid about something they already know about. And I'm just sitting there, going, 'Well, this is awkward.' So instead of just going, 'Yeah, we're flirting with that idea…' There was a way to handle it, and it just wasn't handled right. In no uncertain terms, it was not handled correctly. So… You know… Whatever… Looking back, it's certainly not a fond time in my life. There was a manager that was handling the band [at the time], and he was talking to me about how it was gonna go and he was explaining it to me as if I was some new guy who just came in on board. And I had been in the band for twelve, thirteen years at that point, and I'm, like, 'Dude, do not talk to me like this. Show me some respect. C'mon, man.' But, you know, it really wasn't his fault, because he was kind of put in the position of doing what should have been a conversation between Scott [Ian, guitar] and Frankie [Bello, bass] and Charlie [Benante, drums] and I. If they would have said, 'We think we're gonna do this. We think we're ready to do this,' I probably would have said, 'Well, do it. I don't wanna stand in the way of that. Do it.' It could have been really that simplified, in all honesty."

On whether he expected to return to ANTHRAX after the band's reunion tour with Joey Belladonna:

"No. That was never my idea. Once I left, I thought I was gone for a while. I wasn't gonna resume… That was one of the reasons I tried to convey about… you know, the whole thing that ended up being [ANTHRAX's] 'Worship Music' [album]. I actually started to do this voiceover job, and it was really lucrative at the time, and it was happening, and my daughter was only like a year old, and I was kind of enjoying being home at that point and helping my wife with the business that we've got. I was just like, 'Okay. This is my life now.' And I was embracing it. So I was fine. When [the ANTHRAX guys] kind of said, 'Okay, do you wanna come back?' I said… It wasn't out of any kind of spite. I was just like, 'Nah, I don't really want to.' So I didn't. And they went on to get Dan Nelson and do that. They made that record — they finished that record; it was completed, mixed — everything. And that's when they were going, 'Well, we're gonna shelf it, and we want you to do it.' And at that point, as I've said in numerous interviews, and I guess I'll tell you one more time… For me, and this is nothing against Dan Nelson. I don't know that guy — he might be the nicest guy; I don't know. And nothing against him at all. But I always had to battle and kind of establish myself as the singer [of ANTHRAX following the departure of] Joey Belladonna — which I have no problem with… Joey Belladonna, obviously, did great with ANTHRAX and established himself extremely well and was, for the most part, the main singer of ANTHRAX. So I get it, and I have no problems with that, and I have nothing but the utmost respect for Joey on that. But to go and kind of redo a record that this other guy did and have possible scrutiny against that person, that's when I was, like, 'Nah. I'm not doing that. No way! I draw the line on that one. I can't. My ego's gonna say negative to that,' and that's why I said no. it didn't really matter about the material; it was kind of irrelevant. I mean, they could have written 'The Wall'; it wouldn't have mattered to me. It was, like, 'I'm not doing a record where you're gonna… I'm gonna have scrutiny against people who heard Dan Nelson sing these songs live. I'm not doing that. I'm not competing on that level. I don't want to. I just don't want to.'"

On why he didn't end up re-recording Dan Nelson's vocals on "Worship Music" with ANTHRAX when he was asked to:

"I didn't participate in anything, and I always had on previous records. And granted, if I would have written a few songs… It was just the mindset of… 'Nah. This isn't… No.' I even said, 'Okay, if you pay me this amount of money, I'll do it.' And I gave some crazy figure, because I wasn't doing it out of the love of my soul, I was doing it for another reason. So I was, like, 'Then you've gotta pay me for it.' And that's when Benante got all livid on me and freaked out, and we still haven't spoken since then. But, you know, whatever. I think Joey coming back and [doing] the record, that was the logical decision. Because, remember, I had just made 'We've Come For You All'. It was only a few years before that, so it wasn't some new… There wasn't some big lapse of time between records with John Bush. I made the last record, and it was a great record. And so, there's no reason for there to be some excitement that I'm doing it. Because Joey coming back after not making a record in 20 years, now that would be excitement, that would be a story, and that's why it was right that he came in and did it, and that made sense."

On his current relationship with the members of ANTHRAX:

"Well, I do talk to Scott, and I see Scott on occasion. And Joey Vera [ARMORED SAINT bassist] and [his wife] Tracy are very close to Scott and [his wife] Pearl. And so they come to family functions and things of that nature. And I played Pearl's 40th-birthday party, and we did [ANTHRAX's] 'Safe Home', and it was real fun. So I have a relationship with Scott, because I see him more often, but I have not talked to Charlie or Frankie — I haven't spoken to them since, literally, that time. And, you know, it's weird and kind of probably sucks, but they haven't made an effort to call me, and I haven't made an effort to call them either, I guess. There was some weird stuff that happened when Charlie's mom passed away. I actually did reach out to him, but maybe I had the wrong number or something. I don't know… And so he was, I guess, bent out of shape about that. But… I did actually do it — I really did; I wouldn't lie about that. Obviously, when it [comes] to personal, all the other stuff is meaningless. But, you know, whatever… It is what it is. And there's no reason for me to be okay with Scott and not okay with those [other] guys, 'cause I had a relationship that was the same with all of them. It wasn't like me and Scott were closer and those guys weren't. We were all close at one point."