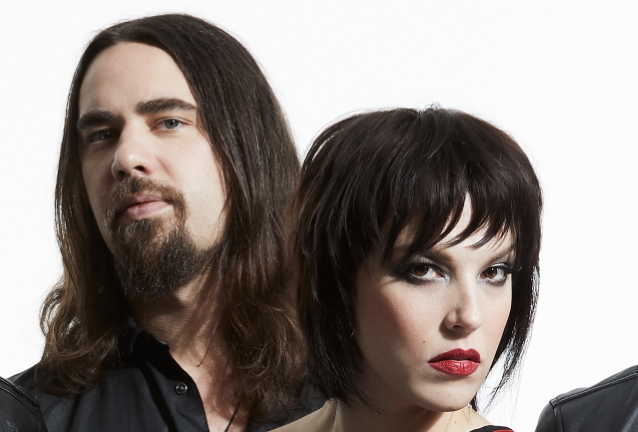 Will HALESTORM's LZZY HALE And JOE HOTTINGER Ever Get Married? She Responds

On Tuesday (April 21),HALESTORM frontwoman Lzzy Hale took part in one of her Twitter #AskLzzyAnything sessions. Asked by one fan when she and HALESTORM guitarist Joe Hottinger are getting married, Lzzy responded: "I truly have never had the desire. Personal preference. Technically I was asked, have a ring passed down that my SO [significant other] was given from my dad. But I'm living a #newmodernlove"

When another fan asked Lzzy if she knows of any good dating sites or apps, she wrote: "Ha! No. I've never used a dating app. I either meet people the old fashioned way by being out at concerts or clubs around the world and me and my anchor have been together for 17 years"

That same year, Lzzy was asked in an interview if she found it difficult to maintain a relationship while on the road. Hale replied: "In a relationship, you have to literally have everything out there to this other person, and they have to do the same thing with you, or it's not gonna work. I've never been a jealous person either, and as of right now, I'm dating someone who is the same way. So we have a very amazing trust thing going on."

I truly have never had the desire. Personal preference. Technically I was asked, have a ring passed down that my SO was given from my dad. But I’m living a #newmodernlove#ASKLZZYANYTHING

Ha! No. I’ve never used a dating app. I either meet people the old fashioned way by being out at concerts or clubs around the world and me and my anchor have been together for 17 years #ASKLZZYANYTHING