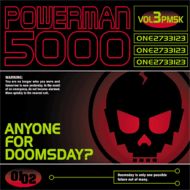 Anyone for Doomsday? (scrapped promo version)

POWERMAN 5000 is like a summer blockbuster movie: loud, flashy, full of effects and spectacle, but when you're done, you barely remember any of it.

The band's third album (or fourth, if you count The Blood Splat Rating System, the indie release that later mutated into their Dreamworks debut, Mega!! Kung-Fu Radio, as a separate record) picks up right where 1999's Tonight The Stars Revolt left off, with huge production, pile-driving rhythms, and a heavy, relentless sound. "Bombshell", the album's first single, is a perfect example of what POWERMAN does best: it just grabs you from the start and propels you along on a wave of industrial-metal pyrotechnics.

But like STATIC-X, another band of undeniable power, there's little beneath the surface of POWERMAN's glitzy sound. Listen a little more closely to "Bombshell" and you'll find that the lyrics don't seem to even make sense. While several of the songs work as fist-pumping, pit-inducing anthems ("Wake Up", "Danger Is Go"),there never seems to be any real soul at work here. The sci-fi and apocalyptic leanings are merely for "cool" effect: Rob Zombie, older brother of PM5K frontman Spider One, at least projects a real fan's enthusiasm for the horror/trash culture trappings he drapes his own music in.

Anyone For Doomsday? is far from a bad record. In fact, it's great, high-energy modern metal that rocks very hard and consistently. It's also a no-frills effort that makes its point in 33 minutes — quite a daring move in these days of bloated, 70-minute albums. But you will be listening to it five years from now — or even six months from now? That seems highly unlikely.