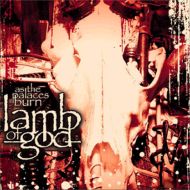 As The Palaces Burn

"With trembling hands you'll beg for mercy / I'll show you none," roars LAMB OF GOD front man Randy Blythe in "Purified". It's a fitting battle cry for the sophomore release from the Richmond, Va. quintet, for "As The Palaces Burn" — with points docked only for brevity (three years yields just 38 minutes?) — should lay waste to other metalcore pretenders and firmly cement the group at the forefront of the modern metal movement.

While more and more extreme acts continue to commercialize their sound by following the predictable abrasive verse/clean chorus pattern, it's refreshing to find LAMB OF GOD refusing to court mainstream acceptance and instead wholeheartedly embracing its brutality. With confrontational lyrics, relentlessly harsh vocals (Blythe must gargle with broken glass),a virgin-tight rhythm section and riffs heavy enough to test the endurance of even the toughest moshpits, "As The Palaces Burn" is uncompromising in its aural assault. Even with STRAPPING YOUNG LAD's Devin Townsend — who famously made SOILWORK's sound so accessible on 2002's "Natural Born Chaos" — engineering and co-producing, the album retains a raw, organic feel.

Townsend guests, albeit subtly, on "A Devil In God's Country", while TODAY IS THE DAY's Steve Austin (producer of LAMB OF GOD's 2000 debut, "New American Gospel") appears on "11th Hour", a haunting tale of alcohol abuse and one of the few tracks on the album that doesn't convey images of Armageddon. Other songs such as "Blood Junkie" and the title track vividly decry the effects of capitalism and war - a tad ironic considering that "As The Palaces Burn" would be a fitting soundtrack to World War III.