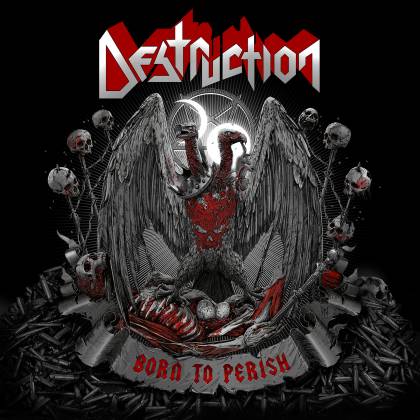 The "Big Four" of thrash is typically in reference to the American hard hitters: METALLICA, MEGADETH, ANTHRAX and SLAYER. But thrash — and all of metal, for that matter — is a global movement. Germany has its own "Big Four," and a significant one at that: SODOM, KREATOR, TANKARD and a band from Weil am Rhein, the nation's most southwestern town located near the German/Swiss/French border meeting point, DESTRUCTION. Founded in 1982, the ensemble melded their classic metal influences — usual suspects like IRON MAIDEN, MERCYFUL FATE, VENOM and MOTÖRHEAD — and spit them out at a more frantic, seemingly crack-fueled pace under the moniker KNIGHT OF DEMON before taking on the name for which they are known.

Fast forward to 2019, the Teutonic thrashers have returned with "Born To Perish", an effort that proves their ongoing relevance and admirable resilience and drive. The ensemble that has traditionally marched forth as a trio has become a quartet this time around with vocalist/bassist Schmier and guitarist Mike Sifringer — the only member who has been around since day one — now flanked by Canadian drummer Randy Black, who has served time with none other than ANNIHILATOR and PRIMAL FEAR, and Swiss guitarist Damir Eskic. The revamped lineup, which includes a significant amount of new blood, has seemingly revitalized the already hungry band. They sound like a band that's excited to see where the new mix of musicians will take them. Quite frankly, they don't travel far from the expected thrashing home base, but there is an undeniable sense of vitality at hand.

"Inspired By Death", a driving classic thrash track, benefits from the contrasting guitar playing styles and nuances of Sifringer and newbie Eskic. "We Breed Evil" sounds like a more seasoned DESTRUCTION in its current format covering classic DESTRUCTION, at least in terms of spirit. "Filthy Wealth" rumbles onward with a touch of biker rock, while "Betrayal" liberally references the pages of epic eighties heavy metal. Elsewhere, new percussionist Black boasts his impressive skills on "Betrayal". "Tyrants Of The Netherworld" proves to be the album's singing gem, a catchy track that's as epic as it is fast and abrasive. And Schmier's characteristic, animalistic snarled vocals tear across the entire release. As we all suspected, DESTRUCTION hasn't set out to reinvent the thrash wheel. With "Born To Perish", they're simply riding that wheel straight to hell and delightfully so.