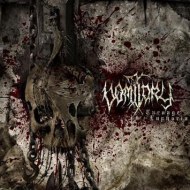 "Carnage Euphoria", the seventh album from Sweden's VOMITORY, has been out for a while now in Europe, but as of this writing there are no plans for a North American release. It would be inexcusable to allow the disc to go unnoticed on these shores, so a review is in order. As anyone that has followed the oft underappreciated act will surely attest VOMITORY do not release bad albums; they're nothing if not consistent. "Carnage Euphoria" is not as good as 2007's "Terrorize Brutalize Sodomize" (in my opinion the best album they've ever released and a Top 10 selection for me that year),but it is a fine album nonetheless.

It is uncompromisingly VOMITORY in its absolutely bludgeoning approach to speeding Swedish death metal crunch. Yes, crunch; it is always the first word that comes to mind when thinking about VOMITORY. And do they ever get a seriously ripping tone to go with those crunchy riffs! The songs are consistently written across the board too and the delivery is again guaranteed to rattle at least one filling out of your teeth, unless you're one of the 10 metal fans out there that never had a cavity. And yes, there are some smashing grooves, as one will hear on the classic slice of up-tempo chunk called "Ripe Cadavers" and the slamming "Serpents" (a highlight).

"Serpents" also happens to be one of a handful of tracks that features some buzz-saw thrash riffing mixed in with the death, no doubt a product of lead guitarist Peter Ostlund's (THE LAW) influences, which can also be said about his soloing. Both are qualities that helped VOMITORY to raise its game and make the songwriting so memorable on "Terrorize Brutalize Sodomize". One can hear the difference in the songwriting on "Carnage Euphoria" as well, whether it is the twin-lead harmonizing that precedes the solo on "A Lesson in Virulence", thrash bits on "Rebirth of the Grotesque", or a surprisingly accessible two-minute blast fest called "Possessed". It is just that the songwriting is not as impacting as it is on "Terrorize Brutal Sodomize".

But take care to not read too much into that statement by thinking it somehow means "Carnage Euphoria" is not a worthy addition to the VOMITORY catalogue. It most certainly is. It is merely a case of comparing it to an outstanding death metal album like "Terrorize Brutalize Sodomize" and realizing that topping that kind of effort is nearly impossible. Never fear though, "Carnage Euphoria" will wreck just as many necks.