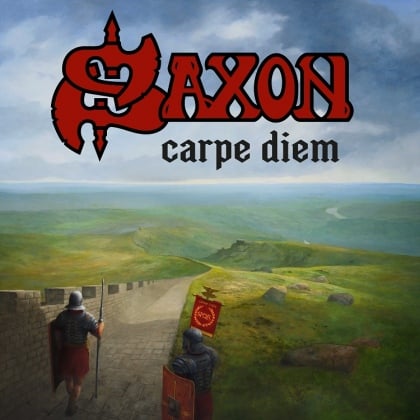 British heavy metal icons SAXON have remained venerable vaunted veterans through four decades in large part due to their charismatic live presence. The band's post-2000 studio output has remained consistent, with new albums being reliably released every few years. The majority of those records have been made up of comfort-food metal anthems re-establishing the group as having a few tricks left up their sleeve. And while they are enjoyable when listening, they ultimately end up with maybe one or two songs entering the live setlist.

The band's 23rd studio album, "Carpe Diem", seems destined to join that lengthy list of records that provide a few moments of heavy metal triumph, showing off what propelled SAXON to their legendary status but never fully rising to the level of a truly great record. The tried-and-true aspects of the group's blueprint still result in plenty of shining moments, nonetheless. Biff Byford's vocal pipes are still full of power on the band's first record since his heart attack in September 2019. His triumphant shouts and cries propel the album to an assertively energetic start with "Carpe Diem (Seize The Day)" and keep that energy high on the faster-paced metallic rock of tracks such as "Remember The Fallen" and "All For One". Byford's ability to craft a chorus that demands a live audience to shout along with him also remains intact, most notably on "Age Of Steam" and "Living On The Limit", the latter of which also sees the band coming closest to invoking the ferocity of early-era SAXON tracks such as "20,000 Feet".

Paul Quinn and Doug Scarratt's guitar work also does plenty of heavy lifting on "Carpe Diem". Even during some of the lesser moments on modern-era SAXON records, the duo generates world-class guitar work with frequent solos that are busy while never feeling forced and excessive. Quinn and Scarratt always seem to have a compelling riff ready to keep a song moving. The duo shows the ability to shred melodically like Joe Satriani on "Remember The Fallen" and throw down bluesier solos on "Black Is The Night", all while maintaining a powerful level of heaviness and dropping rhythm passages that encourage maximum headbanging.

That said, Byford's continued vocal prowess and the guitar duo's superb abilities are not enough to overcome the overall weakness of the band's attempts to slow things down at two points throughout the record. "The Pilgrimage" is a very tepid and overlong power ballad grinding the momentum built by the first two tracks to a screeching halt. The track may have worked better as an album-closing epic and the group wastes no time with the subsequent "Dambusters" to pick the energy back up. One can't help but wonder if excising that and the equally dull mid-tempo slog of "Lady In Gray" to release a tightly packed album of rippers would have better presented the strengths of what SAXON brings to the table in 2022.

Thankfully though, aside from those two missteps, "Carpe Diem" overall serves as a testament that SAXON still has plenty of bullets left in their guns and showcases a band entering their fifth decade of existence with fire still burning.