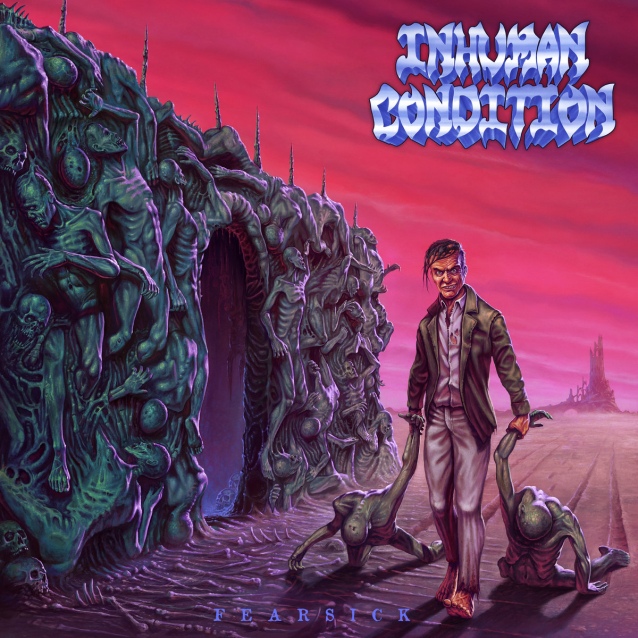 Not everybody has the necessary acumen to create old-school death metal that dares to rival the classics, but INHUMAN CONDITION have made it look easy so far. Formed by ex-members of MASSACRE, and named after one of that band's EPs, the trio began life as a means to use material that was originally written for the next MASSACRE album.

For reasons that you can read and speculate wildly about online, drummer Jeramie Kling (also a member of VENOM INC, THE ABSENCE and EX DEO among others),  guitarist Taylor Nordberg (DEICIDE, THE ABSENCE, GOREGANG and more!)  found themselves with an album's worth of material that was simply too good to shelve. That came out last year as INHUMAN CONDITION's debut album "Rat God", which showcased a complete line-up that featured legendary death metal bassist Terry Butler (OBITUARY, ex-DEATH, ex-SIX FEET UNDER, you get the general idea). The fact that the album was one of the finest and nastiest old -school death metal releases of the year came as no surprise at all, and so it is even less surprising that "Fearsick" offers more of the excellent same, right down to Dan Goldsworthy's grimly gaudy artwork.

The simple truth is that INHUMAN CONDITION deliver exactly what fans of this music want, and with such accomplished and iconic musicians involved, their second album wields authority and heavyweight clout. Some of these songs are disgustingly catchy: "Recycled Hate" and "I'm Now The Monster" are going to be murderous live anthems, and "Fencewalker" is a simply jaw-dropping amalgam of none-more-classic DM tropes. Elsewhere, "King Con" dishes out some psychological punishment at a dominant mid-pace, and "Where Pain Is Infinity" slows things down for maximum, malevolent effect, before tearing off in full early '90s mode, a shit-eating grin plastered across zombie features. But really this is a celebration of the straightforward and the tried and tested.

INHUMAN CONDITION waste no time trying to be anything other than a neck-wrecking, no-nonsense death metal band, and "Fearsick" is their second genuinely great album in a row. What began as an impromptu project is now beginning to sound like a very serious proposition.