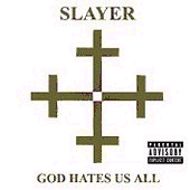 God Hates Us All

Never known for being particularly experimental in their songwriting approach, SLAYER have occasionally attempted to expand upon their sound to mixed results—the most obvious example being the group's 1988 offering, South Of Heaven, which is still regarded highly by most SLAYER followers but is rarely thought of as one of the band's finest moments. Although none of the quartet's subsequent releases have indicated much of a desire to deviate from the formula (with 1994's Divine Intervention standing as a by-the-numbers affair that pales in comparison to its predecessors),1998's Diabolus In Musica was at least a feeble attempt at incorporating updated elements into the group's sound, the presence of which elevated the band's efforts somewhat and offered hope that SLAYER could refrain from endlessly rehashing their previous material for their future output.

While God Hates Us All possesses some of the same ingredients that made Diabolus… a marginally refreshing surprise, SLAYER's latest represents yet another failure on the band's part to take the initiative and reinvent themselves—a regurgitation of the group's past songwriting efforts in the hopes of pleasing no one but their most ardent and loyal fans.

As was the case with the aforementioned Divine Intervention, the bulk of the songs on God Hates Us All were written by guitarist Kerry King—widely regarded as the weaker and less inventive of the two main songwriters—and as such, they tend to  follow a familiar direction that almost always sounds tired and forced—like the efforts of a band trying desperately to sound true to itself, but sadly lacking both the creativity and the inspiration to do it convincingly. However, the biggest surprise—and ultimately, disappointment—comes in the shape of the vocal performance of frontman Tom Araya. Once considered to be at the very top of his field—with the kind of vocal power and conviction most of his counterparts could only dream of—Araya has transformed into a hollow shell of his former self, boasting a singing style that is monotonous, devoid of creativity and at times virtually unlistenable.

Hardcore SLAYER fans and other supporters will undoubtedly make the claim that the band is merely doing what they do best, and they will point to the fact that the group is still selling out small theaters across the US as an indication of their continued success. Those of us that know better, however, will see SLAYER's rapidly diminishing record sales (Diabolus In Musica has shifted less than 300,000 copies in the US compared to Seasons In The Abyss' 600-700,000+) as a sign that the band is in dire need of a new lease on life — one that seems more and more unattainable with each successive SLAYER release—and will sadly await the day when the group's long-term career comes to a seemingly inevitable grinding halt.