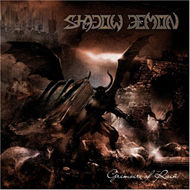 Those into the classier side of U.S. power metal, the type that hearkens back to the days of OMEN and classic JAG PANZER, have just found their newest band to champion. SHADOW DEMON hail from the Pacific Northwest, and their stock in trade is unrepentant, glorious, down and dirty '80s metal, a combination of power and thrash that will appeal to fans of ICED EARTH's earlier works, but has an even more epic and encompassing scope.

The throwback feel to "Grimoire of Ruin" is only accented by its fairly bargain-basement production. The drums, particularly, suffer from what can only be a lack of funds – I'm still not entirely convinced that a human being played them, and if he did, he should be ashamed for letting such bad triggered sounds be used. Vocalist Blaine Hammond hits a few sour notes, too, though his overall performance is an impressive mix of melody and grit that recalls former ICED EARTH man Matthew Barlow and BLIND GUARDIAN's Hansi Kürsch in places.

As far as songwriting goes, though, SHADOW DEMON are already world class. Delve into "The Dark Citadel" for some moments of pure thrash bliss that would do prime TESTAMENT proud, while "…And the Meek" is a flat-out barnstormer with a chorus that could raise the dead. "Brave Murder Day" contains a lot of cool parts as well, although it's a bit more disjointed, and the dodgy production gets in the way of the song's presentation (particularly at the beginning). "Umbris Mortis" starts out with a surprising round of blast beats and retains a sinister black metal feel, despite Hammond's using an eerie clean monotone vocal for effect. These guys are clearly comfortable with many influences, and not concerned with fitting into anyone's easy definition of "power metal" or anything else – the end result is a dynamic and interesting album.

SHADOW DEMON have a personality and a uniqueness to them, which keeps them interesting despite the occasional misstep. "Grimoire of Ruin" is awesome even with rough sound, its essence not squeezed out by autotuned and computerized perfection (except for those pesky drums, of course). The band can take its place alongside other quirky, passionate US trad-metal bands like PHARAOH and IMAGIKA, those following their own muses and fighting to survive amid cruel economic reality and the indifference of a vast majority of their countrymen. SHADOW DEMON is well worth your support, easy contenders for Rookie of the Year, and a refreshing testament to the life still left in traditional heavy metal done right. Arguably a 9 with better production.