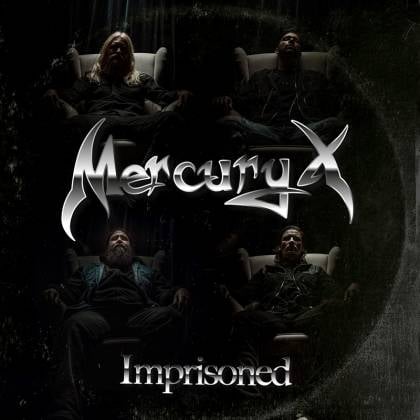 Putting aside the age-old debate about the difference between 'progressive' and 'prog' for a moment, it's always exciting to hear someone gleefully nailing a classic sound. Thunderously heavy but technically adept on a level that seems slightly unfair, MERCURY X are undoubtedly going to excite a huge number of DREAM THEATER and SYMPHONY X fans with their new album. "Imprisoned" is a rampaging and exuberant piece of work, and one that serves up every desirable aspect of those aforementioned bands' trademark sounds. Frontman and guitarist Martin Björklund has a powerful voice, full of Russell Allen-like grit but able to switch seamlessly to misty-eyed pathos, and, as you might expect, his colleagues are all absurdly gifted technicians. From the opening seconds of "Until The Break Of Day" onwards, the band's third album is impossible to fault on a technical level, nor in terms of its production, which is as beefy and precise as it deserves to be. For all of the above alone, MERCURY X are worthy of your attention. "Imprisoned" sounds massive and ruthlessly contemporary. Meanwhile, these guys can really fucking play.

Beyond delivering the expected prog metal goods, MERCURY X are also forging their own singular path. Scratch the surface and "Imprisoned" has unexpected depths and a fearsome and singular identity, as the Swedes gently subvert that cherished old-school prog metal formula. Both "The Light In Your Eyes" and "Lonely" are strongly melodic but full of curious tonal shifts and atmospheric tricks, with Björklund's voice an endlessly compelling focal point at the center of the storm. These are seriously memorable and well-crafted songs, too with clever vocal harmonies and swathes of mid-ground ambience that all conspire to generate an otherworldly feel.

If there are echoes of a more modern conception of prog metal here, then that is surely deliberate: the lines between the old school and today's liberated thinkers are skillfully blurred throughout this album's immersive 40 minutes, and particularly during the title track. At an ambitious 20 minutes in length, it begins in true classic prog metal fashion, but the twists, turns and detours that MERCURY X subsequently take are anything but perfunctory. Instead, "Imprisoned" is an eccentric and tumultuous journey that surfs multiple peaks and valleys, buoyed by the power of everything from clangorous groove metal to shimmering post-rock. In fact, it's such an extraordinary song that album closer "The Sound Of Nothing" comes across as slightly ordinary in comparison. It isn't ordinary, of course, and MERCURY X are manifestly operating on some high prog metal plane throughout this record. But that epic and pointedly proggy centerpiece suggests that this band are capable of even greater feats of genre-twisting gallantry. For now, "Imprisoned" is more than enough.